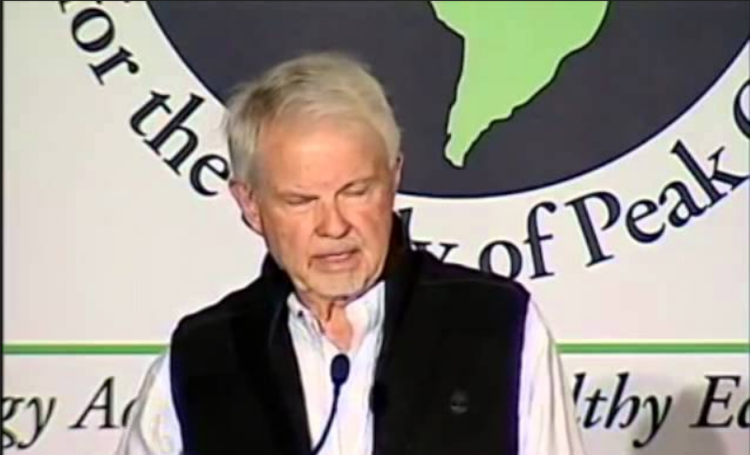 You Can Hear It Now: Governor Dick Lamm's Famous Musings On "How To Destroy America"

In October 2003, Victor Davis Hanson spoke at FAIR's National Advisory Board Conference about his recent book Mexifornia.  [FAIR is the Federation for American Immigration Reform.]  As recounted by Frosty Wooldridge, Hanson was followed by former Colorado Governor Richard Lamm, whose brief ruminations keying on Hanson's book are famous: Written versions have been posted all over the web and surely exist today in some of those endlessly-circulating emails that everyone receives.

For readers' convenience, I'll paste the "official" text of Lamm's remarks below, but you might prefer to see them [PDF] where first officially published, in the Spring 2004 issue of The Social Contract quarterly.  (The Wooldridge article also contains an approximate text of the remarks.)

I'd never actually heard Lamm's talk until June 24th, when Mark Levin "played the tape" early in his radio program, during a discussion of the current border crisis.  It was wonderful to finally channel the wisdom directly, in Lamm's own voice.

It turns out that Levin had used the recording — obtained from FAIR, since they advertise on his show — for the first time a few months earlier.  From that earlier show, someone has created a ~five-minute YouTube clip that contains some prefatory comments by Levin, followed by Lamm's three-minute masterpiece, and then some concluding remarks by Levin.  That's at this link.

Immigration-patriot extraordinaire Hal Netkin has made a version available that's distilled from Levin's show down to just Lamm's talk.  If you're interested in that version, which you must first download (4.2 MB) to your own device, go here.

(Netkin's version will be there, no matter what happens to the YouTube copy.  And if all else vanishes, you can access it at the podcast for Levin's 6/24/14 show: Go here and then jump to 7:40, where Levin begins to introduce Lamm.  [Before that, Levin plays a recording of libertarian economist Milton Friedman talking, mostly sensibly, about immigration.])

Here's the "official" Lamm text, which differs in some details from the spoken version linked above:

I Have a Plan to Destroy America

And many parts of it are underway

I have a secret plan to destroy America. If you believe, as many do, that America is too smug, too white bread, too self-satisfied, too rich, lets destroy America. It is not that hard to do. History shows that nations are more fragile than their citizens think. No nation in history has survived the ravages of time. Arnold Toynbee observed that all great civilizations rise and they all fall, and that “An autopsy of history would show that all great nations commit suicide.” Here is my plan:

I. We must first make America a bilingual-bicultural country. History shows, in my opinion, that no nation can survive the tension, conflict, and antagonism of two competing languages and cultures. It is a blessing for an individual to be bilingual; it is a curse for a society to be bilingual. One scholar, Seymour Martin Lipset, put it this way: The histories of bilingual and bicultural societies that do not assimilate are histories of turmoil, tension, and tragedy. Canada, Belgium, Malaysia, Lebanon – all face crises of national existence in which minorities press for autonomy, if not independence. Pakistan and Cyprus have divided. Nigeria suppressed an ethnic rebellion. France faces difficulties with its Basques, Bretons, and Corsicans.

II. I would then invent “multiculturalism” and encourage immigrants to maintain their own culture. I would make it an article of belief that all cultures are equal: that there are no cultural differences that are important. I would declare it an article of faith that the Black and Hispanic dropout rate is only due to prejudice and discrimination by the majority. Every other explanation is out-of-bounds.

III. We can make the United States a “Hispanic Quebec” without much effort. The key is to celebrate diversity rather than unity. As Benjamin Schwarz said in the Atlantic Monthly recently: “...the apparent success of our own multiethnic and multicultural experiment might have been achieved not by tolerance but by hegemony.” Without the dominance that once dictated ethnocentrically, and what it meant to be an American, we are left with only tolerance and pluralism to hold us together. I would encourage all immigrants to keep their own language and culture. I would replace the melting pot metaphor with a salad bowl metaphor. It is important to insure that we have various cultural sub-groups living in America reinforcing their differences rather than as Americans, emphasizing their similarities.

IV. Having done all this, I would make our fastest growing demographic group the least educated – I would add a second underclass, unassimilated, undereducated, and antagonistic to our population. I would have this second underclass have a 50 percent drop out rate from school.

V. I would then get the big foundations and big business to give these efforts lots of money. I would invest in ethnic identity, and I would establish the cult of Victimology. I would get all minorities to think their lack of success was all the fault of the majority – I would start a grievance industry blaming all minority failure on the majority population.

VI. I would establish dual citizenship and promote divided loyalties. I would “celebrate diversity.” “Diversity” is a wonderfully seductive word. It stresses differences rather than commonalities. Diverse people worldwide are mostly engaged in hating each other – that is, when they are not killing each other. A diverse,” peaceful, or stable society is against most historical precedent. People undervalue the unity it takes to

keep a nation together, and we can take advantage of this myopia. Look at the ancient Greeks. Dorf’s World History tells us: “The Greeks believed that they belonged to the same race; they possessed a common language and literature; and they worshiped the same gods. All Greece took part in the Olympic games in honor of Zeus and all Greeks venerated the shrine of Apollo at Delphi. A common enemy Persia threatened their liberty. Yet, all of these bonds together were not strong enough to overcome two factors … [local patriotism and geographical conditions that nurtured political divisions…].” If we can put the emphasis on the “Pluribus,” instead of the “Unum,” we can balkanize America as surely as Kosovo.

VII. Then I would place all these subjects off limits – make it taboo to talk about. I would find a word similar to “heretic” in the 16th century – a word that stops discussion and paralyzes thinking – a word like “racist” or “xenophobe” that halts argument and conversation. Having made America a bilingual-bicultural country, having established multiculturalism, having the large foundations fund the doctrine of “victimology,” I would next make it impossible to enforce our immigration laws. I would develop a mantra – “that because immigration has been good for America, it must always be good.” I would make every individual immigrant sympatric and ignore the cumulative impact.

VIII. Lastly, I would censor Victor Hanson Davis’s book, Mexifornia. This book is dangerous – it exposes my plan to destroy America. So please, please – if you feel that America deserves to be destroyed – please, please, don’t buy this book! This guy is onto my plan.