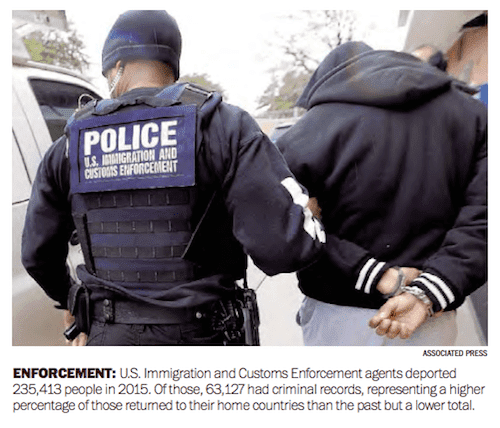 It’s not exactly news that deportation is a lost art under the open-borders Obasma regime. But the Washington Times had an interesting stat-fact in its front-page story on Wednesday: the chance that an illegal alien gets deported is just one is 164. How does that compare with getting struck by lightning, I wonder…

A Rasmussen poll from August showed a majority of voters favor deporting lawbreakers, but the White House doesn’t notice surveys that disagree with its priority of amassing more future Democrats.

You can read the wonky bureaucratese of the memo here: DHS Releases End of Fiscal Year 2015 Statistics.

Chance of illegal immigrant being deported is 1 in 164

President Obama slashed the number of deportations in 2015, the administration announced Tuesday, removing out only about 235,000 aliens from the U.S. as his amnesty kicked into full gear, putting most illegal immigrants out of reach of agents.

Overall deportations dropped by 32 percent, and even deportations of criminals — whom Mr. Obama had said he wanted to focus on — dropped by 27 percent compared to fiscal year 2014, according to year-end statistics released by Homeland Security.

Homeland Security officials cheered the drop, saying they’ve made good on Mr. Obama’s plan to stop deporting rank-and-file illegal immigrants who have kept out of trouble, other than violating immigration laws.

And they claimed good news on the border as well, where apprehensions are down dramatically, falling to about 337,000, or the lowest number since 2011, and is far lower than the peak of 1.6 million caught at the border in 2000.

But the good news may be short-lived.

Already two months into fiscal year 2016, which began in October, the number of Central American children traveling alone and families traveling together has surged to its highest rate ever, leaving Homeland Security scrambling to address a problem Mr. Johnson had thought he’d licked in 2014.

“We will be challenged again by a variety of factors driving illegal migration to the U.S., mostly from Central America, and we are redoubling our border security efforts now to meet that challenge,” Mr. Johnson said in a statement acknowledging the problem and detailing the final 2015 results.

The new numbers came as most of Washington had already shut down for the Christmas holiday. Leaks earlier in the year, though, had presaged the precipitous drops.

Immigration enforcement is divided into two categories: Those picked up along the border, and deemed to be newly arrived illegal immigrants, and those caught in the interior, who have often been in the country for years, living in the shadows, often holding down jobs and sometimes even paying taxes.

Mr. Obama has during his tenure tried to shift his enforcement away from the interior, arguing those folks shouldn’t be deported, and toward the border, where he says newcomers aren’t as welcome as those who have broken the law for longer, but who have also established themselves in communities.

Overall, 235,413 people were deported by U.S. Immigration and Customs Enforcement (ICE) in 2015, with most of those being caught at the border. Only 69,475 were caught in the interior — down from about 87,000 a year earlier. Of those, 63,127 had criminal records — a higher percentage than in the past, but still a lower total number.

Homeland Security officials have blamed part of their problem on sanctuary cities, where officials refuse to work with federal authorities on identifying and transferring immigrants to deportation agents.

Pressed by Hispanic rights groups, a number of cities, counties and states have adopted policies shielding illegal immigrants. In those cases, local officials release illegal immigrants back into communities rather than holding them for pickup by ICE agents, forcing federal authorities to spend more money — and risk their lives in the process — to track the aliens down out in society.

Mr. Johnson said Tuesday he’s making headway in convincing some of the country’s biggest cities to cooperate, including Philadelphia, which he announced had agreed to once again start working with his agents.

“This agreement is good for the public safety of the City of Philadelphia. It will prevent dangerous, removable criminals from being released to the streets,” Mr. Johnson said.

With only about 69,000 immigrants deported from the interior, out of a total population of 11.5 million, it means an illegal immigrant’s chances of being kicked out last year were about 1 in 164.

That’s far less than estimates the government filed with the Supreme Court, where the Obama administration had said as recently as a few years ago it was funded to deport as much as 4 percent of the population. Funding has increased, but the number of deportations has dropped.

“I don’t know how the administration can claim that these dismal numbers are a vindication of their priorities,” said Jessica Vaughan, policy studies director at the Center for Immigration Studies. “ICE is doing less enforcement with more resources than ever before. Not only is this poor stewardship of public funds, but it is causing public safety and security problems in communities all over the country, as too many deportable criminal aliens are allowed to stay here in defiance of the law.”

The lower number of deportations is a result of a series of policies Mr. Obama put in place since 2011. He has told agents to ignore more than 9.5 million of the estimated 11.5 million illegal immigrants in the country, arguing that they don’t have criminal convictions on their records, and so they should be allowed to stay.

One part of Mr. Obama’s plan, which would have granted work permits and Social Security numbers to millions of those illegal immigrants, has been halted by federal courts. But the vast majority of his executive actions remain effective.

Hispanic-rights advocates have called Mr. Obama’s policies a qualified success, saying he has allowed hundreds of thousands of illegal immigrants to stay who would otherwise have been deported. But they still say there are cases where those with relatively minor or old criminal records are being deported.