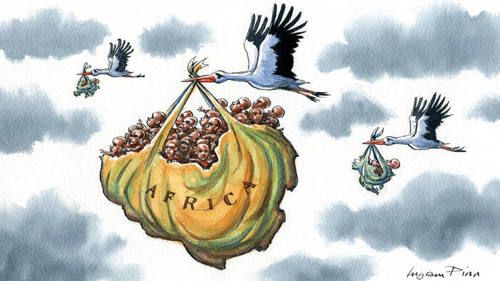 Ya Think? "Africa Cannot Count on a Demographic Dividend"

… If you asked people to identify the most important trends shaping the world, many would name climate change, the rise of China, the potential of artificial intelligence or the surge of nationalism. Few would mention the dramatic increase of the population in a continent that to many is an afterthought. …

The UN’s base case is that the number of Africans will double in 30 years to 2bn and at least double again, to 4bn, by the end of the century….

If, as seems equally plausible, they cannot, Africa could become a focus of instability and desperation. Food shortages could worsen, exacerbated by climate change. …

In African Exodus, Asfa-Wossen Asserate, an Ethiopian who has spent his adult life in Germany, says future waves of immigration to Europe could dwarf existing numbers. “Above all, it is a general lack of prospects that is driving Africans from their homes,” he writes.

Some argue that this is Africa’s demographic dividend. Just as Asia did before it, Africa will reap its rewards in terms of high growth and rising living standards. But this is to misunderstand what a demographic dividend is. If adding people were enough, then Africa would already be rich.

The true meaning of a demographic dividend is a drop in the dependency ratio, or a rise in the working-age population relative to young people and retirees. By this measure, Africa does not have a dividend at all. It has a deficit — one that is widening. In much of the world, the working age population (15-64) makes up 60-70 per cent of the total. In Africa, it makes up just 54 per cent.

The main reason is that fertility rates have not fallen as fast as in other regions. In 1960, women in most developing countries had more than six children each. This fell dramatically in subsequent decades. By the mid-1990s, the rate was 3 in Latin America and just 2.2 in east Asia. In Africa it remained stubbornly high, falling slightly to 5.9 by the mid-1990s and to 4.85 today.

The reasons are not obvious. One may be lack of access to contraception, used regularly by less than one in five African women.

The UN Development Programme says that, with an average age of 62, African presidents are out of touch with the policy needs of much younger populations.

For example, I can remember talking to a grad student at UCLA from Cameroon in West Africa back in 1981. He was in touch with elite opinion in Cameroon (a couple of his brothers were in the cabinet back home). He said that Cameroon needed more people because the countryside was too inefficiently underpopulated to support amenities like rural electrification.

Okay, I replied, rural electrification is a good thing. But are you sure you can slam the brakes on when you get to optimum population density?

I bring up this musty old anecdote from 1981 because Cameroon has had the same president-for-life, Paul Biya, since 1982. Africa has a lot of old dictators who probably still have many of the same ideas as when they came to power. Why would they have new idea? They are surrounded by yes men at home. And when they vacation in France and England, do they get hear that they need to work on cutting fertility at home? Not much. It sounds kind of racist so who wants to bring it up?

… In Africa, some argue that the continent is still sparsely populated by European or Asian standards. Scaremongering about an African population explosion, say others, smacks of racist fears.

Those arguments are understandable. But they are misguided. The growth of Asia suggests strongly that the best way of improving livelihoods is through a reduction in the fertility rate — and with it the dependency ratio. With fewer children to worry about, parents can devote more time and resources to feeding, educating and providing opportunities for those they have.

Once again, I don’t think African overpopulation is an impossible problem. Bangladesh has brought its fertility rate down close to replacement. Some countries in Africa seem to have made a lot of progress as well.

But it’s a big problem.