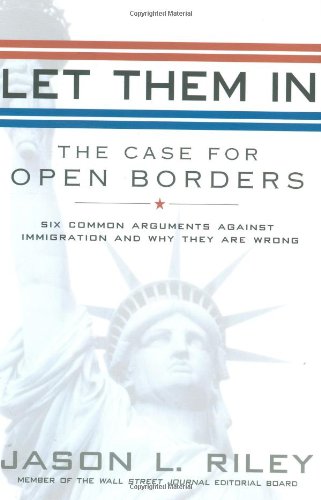 When blogging about the Cato Institute's book forum on Wall Street Journal editor Jason Riley’s Let Them In: The Case for Open Borders , James Fulford noted that the commentator was Michael Barone and the moderator was Dan Griswold, so we shouldn’t expect spirited debate.

I wouldn't really call it "debate," but Riley was so off the charts that he even gave Michael Barone pause.

Riley’s speech was supposed to demolish the various distorted arguments used by us restrictionists.[Watch or listen here.] I am not familiar with the statistics he used, but I'll take them at face value for the sake of argument.

He began with crime. He said that within every ethnic group, the crime rate among immigrants is lower than native born. Of course this just shows that the children of immigrants are not assimilating—or assimilating downward. The important point is that the ethnic groups that are immigrating to this country—namely Hispanics—whether legal, illegal, or native born are committing more crimes than the (still) majority white population. Therefore, any increase in Hispanics increases crime.

Riley [Email him.] then goes to dismissing the welfare arguments. He says that since illegal immigration has skyrocketed in the mid 1990s, overall welfare rates have gone down. Of course this confuses correlation with causation.Welfare Reform probably had something to do with the drop. When you compare the rates of Hispanics and immigrants who are eligible for welfare, they both have much higher rates than the rest of the population. Moreover, the average immigrant household costs taxpayers$20,000 in benefits other than means tested aid. Then there was Michael Barone’s familiar comparison  of Hispanics to various European ethnic groups’ dysfunctions in the past. Presumably this proves that all objections to Hispanics are unfounded.

In the Q&A, I brought up the inconvenient fact that all the groups they talked about were European, while bothBlacks and Native Americans have yet to assimilate. Both Barone and Riley responded by bringing up that African immigrants are doing much better than blacks. What they did not mention is that the population of Africans is still quitesmall and self selective,  and that like Hispanics the second generation is assimilating downwards.

By comparison to Riley, even Michael Barone seemed relatively sane. He acknowledged that it is hard to predict immigration flows, and that the crafters of the 1965 Act were wrong when they said that immigration levels would not affected by the new law. He expressed some sympathy for reforming prioritization for legal immigration away from family reunification and towards a skill based system.

He admitted that, as a whole, the influx of Hispanics is bad for the GOP, but said it was a fait accompli that the GOP must adapt to. Unlike Riley who called for completely open borders, Barone thought that we should make our decisions based on citizenship and assimilation rather than just having a willing employer.

Barone is still on the other side from us, but it actually seems like he has been thinking about this issue. The same cannot be said of Jason Riley, who seems incapable of doing anything besides regurgitating WSJ editorials.