We are lectured daily that Islam is “The Religion of Peace” despite mounting evidence to the contrary, e.g. over 17,000 Islamist terror attacks since 9/11.

Today’s example of Islamic malevolence is the wanna-be Fort Hood murderer #2, Pfc. Naser Abdo, who was arrested Wednesday in Killeen, Texas, for plotting a deadly attack with explosives and firearms.

In 2009, Major Nidal Hasan murdered 13 and wounded 32 on the Fort Hood base. Perhaps he was an inspiration to Mr. Abdo.

Interestingly, Abdo’s pursuit of conscientious objector status made him a darling of the anti-war left, like the Courage to Resist website which celebrated his actions, as “The missing story of Muslim peacemaking” which was quickly scrubbed from view after the arrest. 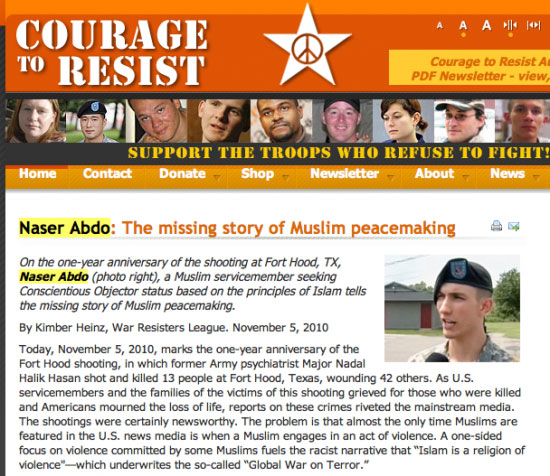 Al Jazeera swooned similarly in its portrayal of the courageous Muslim lad trying to keep his faith among the bellicose infidels, as reported by MEMRI last year:

Reporter: “The Muslim U.S. soldier Nasser Abdo prays five times a day where he lives near the Fort Campbell base in Kentucky, from where some 5,000 soldiers are to be sent to Afghanistan as part of President Obama’s plan, which strives to eliminate the Taliban. Abdo’s fellow soldiers are preparing for deployment to Afghanistan soon, according to their orders. But this Muslim soldier is refusing to be sent with his unit, because, he exclaims, as a Muslim he is forbidden to kill Muslims.”

Clearly, recent events show he had no problem with killing fellow soldiers or innocent civilians.

The Fox report below has a few seconds showing Abdo praying toward Mecca taken from the Jazeera story.

Diversity in immigration is so enriching.

Now the gentle conscientious objector has shown a less kindly side, behaving in a “defiant” way in court and yelling out the name of the Islamic mass murderer Nidal Hasan, who has apparently become a hero to America-hating jihadists.

Chalk up another poster boy for hostile Islam in America.

An AWOL soldier accused of plotting to launch an attack on Fort Hood was defiant during his first court appearance on Friday, yelling out the name of the Army psychiatrist blamed in the 2009 deadly shooting rampage at the same Texas base.

Federal prosecutors charged 21-year-old Pfc. Naser Abdo with possessing an illegal firearm, two days after he was arrested at a motel about 3 miles from the front gate of Fort Hood. He told authorities he planned to construct two bombs in the motel room using gunpowder and shrapnel packed into pressure cookers and then detonate the explosives at a restaurant frequented by soldiers, court documents released Friday said.

Abdo, who had requested conscientious objector status because his Muslim beliefs prevented him from fighting in Iraq and Afghanistan. refused to stand up during Friday’s court hearing when asked. As he left the room, he shouted: “Nidal Hasan Fort Hood 2009.”

Hasan, an Army major and psychiatrist, is charged in the 2009 deaths of 13 people at Fort Hood in the worst mass shooting ever on a U.S. military installation.

Abdo’s words in court were a sharp contrast to an essay he wrote last year as the first anniversary of the Fort Hood shootings approached and as he petitioned for conscientious objector status. In the essay, obtained by The Associated Press, Abdo said the attacks ran against his beliefs as a Muslim and were “an act of aggression by a man and not by Islam.”

Abdo was approved as a conscientious objector this year, but that status was put on hold after he was charged with possessing child pornography. He went absent without leave from Fort Campbell, Ky., during the July 4 weekend.

On July 3, Abdo tried to buy a gun at a store near the Kentucky post, according to the company that owns the store. Police in Killeen, where Fort Hood is located, said their break in the case came Tuesday from Guns Galore LLC — the same gun store where Hasan bought a pistol used in the 2009 attack. Store clerk Greg Ebert said Abdo arrived by taxi and bought 6 pounds of smokeless gunpowder, three boxes of shotgun ammunition and a magazine for a semi-automatic pistol.

“We would probably be here today, giving you a different briefing, had he not been stopped,” said Killeen Police Chief Dennis Baldwin, who called the plan “a terror plot.”

Authorities said they found two clocks, spools of auto wire, a Winchester .40 caliber ammunition and a handgun in a backpack, according to court documents. They also discovered an article titled “Make a bomb in the kitchen of your Mom,” the same title of a how-to article featured in Inspire, the English-language magazine by the terror group based in Yemen, al-Qaida in the Arabian Peninsula.

It was not immediately known of Abdo had any connections to terror groups or Hasan. James Branum, an Oklahoma attorney who had been representing Abdo on the child pornography charges, said Friday he had not heard from Abdo.

He said Abdo was “stressed and anxious” about the child pornography charges but “I didn’t see any indication he would do anything like this. … I would not have taken the case if I had any indication of this kind of mindset.”

In several writings by Abdo obtained by the AP portray a devout infantry soldier struggling with his faith while facing the prospect of deployment and what he felt was the scorn of his peers.

“Overall, as a Muslim I feel that I will not be able to carry out my military duties due to my conscientious objection,” Abdo wrote in his application for conscientious objector status. “Therefore, unless I separate myself from the military, I would potentially be putting the soldiers I work with in jeopardy.

FBI, police and military officials have said little about whether or how they were tracking Abdo since he left Fort Campbell. Patrick J. Connor, special agent in charge with Army Criminal Investigation Command at Fort Hood, said efforts had been made to locate him after an arrest warrant was issued but he would not elaborate.

Abdo grew up in Garland, a Dallas suburb about 170 miles from Fort Hood. In his essay, which he sent to the AP last year as he made his conscientious-objector plea, he said his mother is Christian and his father is Muslim, and that he decided to follow Islam when he was 17.

He wrote that he joined the Army believing he could serve in the military and honor his religion, but he ended up having to endure insults and threats from fellow soldiers over his religion during basic and advanced training. He said life was better after he arrived at his first duty station, but that he studied Islam more closely as he neared deployment to learn “whether going to war was the right thing to do Islamically.”

“I began to understand and believe that only God can give legitimacy to war and not humankind,” he wrote. “That’s when I realized my conscience would not allow me to deploy.”

His application was filed in June 2010. The Army’s Conscientious Objector Review board denied his request, but the deputy assistant secretary of the Army Review Boards Agency recommended he be separated from the Army as a conscientious objector. The discharge was delayed when he was charged with possession of child pornography on May 13.