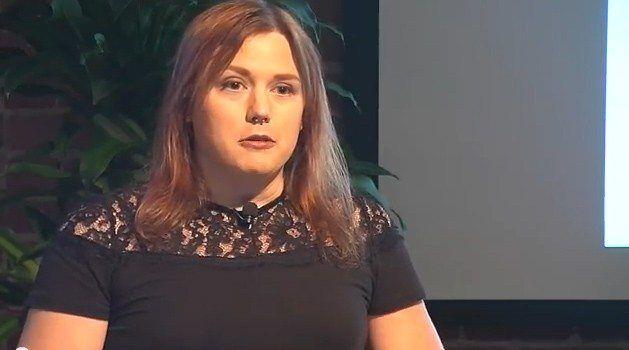 Contemporary Who? Whom? thinking is highly appealing because it doesn't require reasoning from objective principles, which can make your brain heat up. All you need to know is which categories of people are on your team, and then you know who is right and who is wrong, because your team is good and the other team is bad.

On the other hand, there is also the urge to incorporate onto Your Team as baroque a set of teammates as possible to prove the undeniable goodness of your team, as exemplified by the ongoing World War T.

From the San Francisco Examiner:

A prominent advocate for transgender and women's rights in the tech world has been charged with raping her wife, The San Francisco Examiner has learned.

Dana McCallum, a senior engineer at Twitter who speaks and writes about women's and transgender-rights and technology issues, was arrested Jan. 26 and booked into County Jail on suspicion of five felonies, according to the Sheriff's Department.

McCallum, 31, who was born a male, openly identifies as a female and whose legal name is Dana Contreras, was charged Jan. 29 with five felonies, including three counts of spousal rape, one count of false imprisonment and one count of domestic violence, according to the District Attorney's Office. She has since pleaded not guilty.

Despite the charges, McCallum's attorney, John Runfola, says the case is simply about money.

"I'm just disgusted that, you know, this is going on," Runfola said. "Dana is an employee [at Twitter] and is about to come into a large amount of money. ... This whole thing is about money."

The couple had been separated, he said, but were still having sexual relations.

McCallum served her wife with divorce papers the day before the incident, Runfola said. ...

According to McCallum's profile on the online publication Model View Culture, for which she wrote about transgender people and women in tech in January 2013, "Dana McCallum has been working in software engineering and engineering leadership since 2000. As an advocate for women in technology and the LGBT community, Dana helped create advocacy teams at Twitter and other companies, served as a delegate on women's issues in India, and speaks regularly at events focused on women and LGBT people in tech."

A December story in Business Insider listed McCallum as one of the most important gay people in the tech world.

I don't want to be too graphic here, but this question is inevitable: Raped with what?