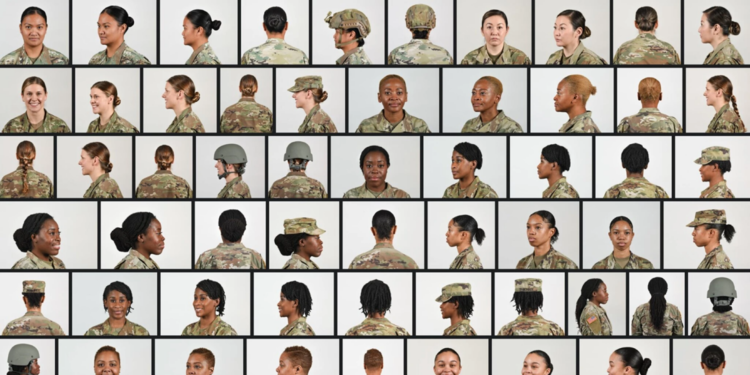 In a Changing Military, the Army Eases Its Rules for Women’s Hair

The Army, which is increasingly dependent on female soldiers, has issued new regulations that allow women to wear lipstick and no longer limits their hair to a tight, disciplined bun.

Capt. Jawana McFadden said that wearing her hair in a bun pushed her helmet forward over her eyes.

… In a military increasingly dependent on women, and particularly Black women, that is now changing.

The latest update to the Army’s uniform and grooming regulations, which takes effect on Friday, offers several revisions that give the 127,000 women serving in the Army and National Guard a chance to finally let their hair down — at least a bit.

For the first time, women will be allowed to have buzz cuts. And they will be able to wear combinations of styles, such as locs pulled back in a ponytail, which for years were off limits. The new rules allow short ponytails at all times, and long ponytails in combat and in training when a bun might otherwise interfere with equipment.

“It’s long overdue,” Captain McFadden said of the change. “It shows that the Army is recognizing we can be soldiers and still be ourselves, that being a soldier and a Black woman is valid and valued.”

The new regulations are tucked among reams of standards that stipulate everything from who can wear capes (officers only) to whether soldiers can stand with their hands in their pockets (no). While permitting ponytails may seem tepid in the freewheeling world of civilian fashion, for women in uniform the changes offer not only welcome flexibility, but a growing sign that the Army is listening, and slowly moving away from military standards that in the past generally let them serve only to the extent that they agreed to look and act like men.

Women will now also be able to have highlights in their hair and wear conservative shades of lipstick and nail polish, so long as they are not “eccentric, exaggerated, or faddish,” and they can wear stud earrings while not in field training or combat.

And the regulations for the first time include guidance on breastfeeding, allowing soldiers to wear a specifically designed nursing T-shirt under their camouflage coat, and authorizing women to unzip the uniform and, without using a cover, “breastfeed anywhere the soldier and child are otherwise authorized to be.” …

“It’s a matter of national defense,” Ms. Germano said. “We just don’t have enough male candidates to do the job.”

The military has developed an especially outsize reliance on Black women, who, Ms. Germano noted, account for nearly a third of all women in the military, even though they make up only about 15 percent of the civilian female population. Black women now serve in the military at a far higher rate than any other demographic group.

“The military offers a lot of opportunities for people we don’t traditionally see as soldiers. They are taking advantage of that,” Ms. Germano said. “And it is slowly reshaping our image of what a soldier is.”

The most recent grooming changes were recommended by a panel of 10 Black women, four white women, one Hispanic woman, one Hispanic man and one Black man drawn from both low- and high-ranking soldiers.

This is starting to sound like Ignatius J. Reilly’s plan for world peace: have fashion-obsessed homosexual men take over all the armies of the world and compete only at throwing the best fancy dress balls.

They sought input from medical experts who detailed how tight buns sometimes led to hair loss, headaches and other problems that affected soldiers’ well-being and performance. …

“When I started in the Army, the saying was ‘All I see is green,’” said Sergeant Major Grinston, who joined the Army as an artillery soldier in 1987 and holds the Army’s most senior enlisted position. The saying was a way of expressing that, regardless of sex, race or background, the Army treated all soldiers the same. “Recently, someone told me, ‘When you say that, you don’t see all of me,’” he said. Seeing everyone as identical kept him and other leaders from understanding the unique challenges and contributions of individuals, he added. “That was really powerful.”

Join the Army to express your individuality!