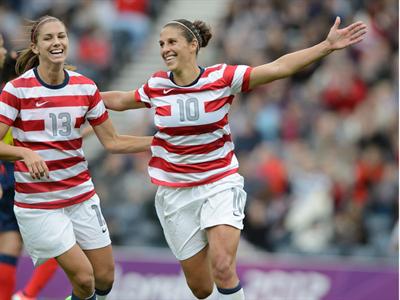 It's especially amazing that the American women's soccer team triumphed in its semifinal and final games over two countries with such long histories of soccer excellence, places where kids are dribbling soccer balls all over the favela from the time they can walk: Canada and Japan.

The problem is that there's nobody left for our women to beat. So, they'll just have to start up a women's pro soccer league, just like all the other super successful women's team sport leagues that got launched in the excitement after the USA proved its feminist superiority by crushing disgusting sexist foreigners for gold in women's basketball and women's softball in 1996, women's ice hockey in 1998, and women's soccer in 1999.

Maybe they should form a Republican women's soccer team and a Democratic women's soccer team that would barnstorm around the country playing each other to see who deserves to win the election. It would be like the Blue and Green chariot racing teams in Justinian's Byzantium. That worked out well.

But seriously, I think we should now spend a quadrillion dollars to send the U.S. women's soccer team to Alpha Centauri so they can win the Galactic Women's Soccer Championship over Epsilon Eridani. Man, I hate those those seven-legged freaks. They are almost as bad as the Canadians.

Hey, how about the American gold medalist in women's boxing! How come Women's MMA isn't in the Olympics yet?

And what about that Aztec game where the losing team captain's heart gets ritually torn out on top of a pyramid? It's sexist that isn't in the Olympics. I can think of a lot of American dad sportswriters who would volunteer at the 2016 Rio Olympics to personally rip the heart out of any foreign upstart who dares challenge the supremacy of our women's ?llamaliztli team. USA! USA! USA!