With Questions About Facebook's Diversity Trending, Why Doesn't China's FoxConn Have To Be Diverse?

The world is commenting on the lack of diversity in the Facebook workforce. The most interesting comment is the observation by Jessica Guynn, the reporter at USA Today, who claims that Facebook, Apple, and Google make cell phones.

"We build products to connect the world, and this means we need a team that understands and reflects many different communities, backgrounds and cultures," Maxine Williams, Facebook's global head of diversity, said in a blog post.

Technology is a key driver of the U.S. economy. It makes the products from iPhones to Google search that Americans use every day. Yet the companies that make these products do not mirror the demographics of the United States in race, gender or age.

All Apple products are made by Foxconn and other contract suppliers in the Peoples Republic of China. All of the manufacturing staff at Foxconn facilities are Chinese citizens and of the East Asian race, specifically ethnic Han Chinese, no Mongols, Tibetans, Manchus, or Uighurs are employed at Foxconn plants.

Foxconn management itself is dominated by Taiwanese nationals, who also of the Han Chinese race. Even worse, Foxconn has a policy of only hiring women on the assembly line, so an iPhone is made by Han Chinese women. 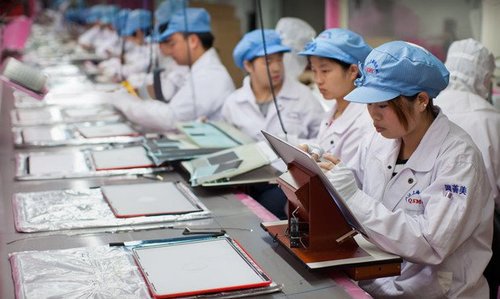 And for the record, words have gender, human beings have two sexes, male and female. Words have a masculine, feminine, or neutral gender.

Google has a cell phone line as well, those sold under the Google name, as well as those running the Google created Android operating system, and all are also almost made in China, though some are made in Taiwan or Korea. Samsung branded phones are only made in Korea and China. There are some minor exceptions for other manufacturers, such as Nokia still manufacturing some models in Finland but most are made in Red China.

One wonders why Foxconn need not be diverse, but other companies like Facebook, Google, Yahoo, and Apple, engaged in products that connect the world, must have more diversity? Those companies are more diverse than the manufacturing plants in China and the contract companies that produce those world connecting cell phones.

Is Guynn in the pay of Red China? Why is she diverting our attention from the racism and lack of diversity at Foxconn? Does she hold stock in Foxconn? Is she just a white Uncle Tom? Is she a man-hating lesbian? What is her motivation? Is she working to cover-up the rampant suicides at Foxconn plants? Does she get paid to write this tripe?