Will the White House Order New Federal Architecture To Be Classical?

… RECORD has obtained what appears to be a preliminary draft of the order, under which the White House would require rewriting the Guiding Principles for Federal Architecture, issued in 1962, to ensure that “the classical architectural style shall be the preferred and default style” for new and upgraded federal buildings. Entitled “Making Federal Buildings Beautiful Again,” the draft order argues that the founding fathers embraced the classical models of “democratic Athens” and “republican Rome” for the capital’s early buildings because the style symbolized the new nation’s “self-governing ideals” (never mind, of course, that it was the prevailing style of the day).

The draft decries the quality of architecture under the General Service Administration’s (GSA) Design Excellence Program for its failure to re-integrate “our national values into Federal buildings” which too often have been “influenced by Brutalism and Deconstructivism.” The draft document specifically cites the U.S. Federal Building in San Francisco (2007, by Morphosis), the U.S. Courthouse in Austin, Texas (2012, by Mack Scogin Merrill Elam Architects), and the Wilkie D. Ferguson, Jr. U.S. Courthouse in Miami (2007, by Arquitectonica) for having “little aesthetic appeal.” 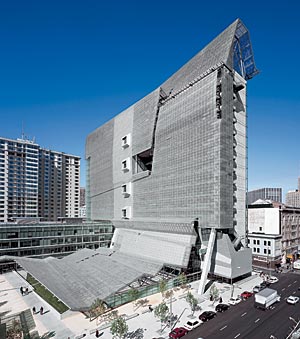 Yup, that is really ugly. It was designed by misanthropic architect Thom Mayne, whose mission in life appears to be to take revenge upon government workers. It’s like if bureaucrat-hating rancher Cliven Bundy were also a fashionable architect employed to design government buildings in trendy cities. Mayne devotes much ingenuity to tormenting civil servants, such as building giant staircases that lead nowhere.

In 2010 the GSA commissioned a survey of employees in 22 federal buildings nationwide, to determine employee satisfaction with their workplaces. … the lowest ranked building for employee satisfaction was the San Francisco Federal Building, with a rating of just 13%; the next-lowest was considered twice as satisfactory, at 26%. The San Francisco building scored well below the median in the categories of thermal comfort, lighting and acoustics.

The mechanism for the radical upending of these principles, in order to promote classical and traditional regional architecture (Spanish colonial style, for example, would be permitted in places like Florida), would be a President’s Committee for the Re-Beautification of Federal Architecture.

The American Institute of Architects responded:

“The AIA strongly opposes uniform style mandates for federal architecture. Architecture should be designed for the specific communities that it serves, reflecting our rich nation’s diverse places, thought, culture and climates. Architects are committed to honoring our past as well as reflecting our future progress, protecting the freedom of thought and expression that are essential to democracy.”

The specific community that Thom Mayne’s buildings serve are Starchitect-Americans and nobody else.

I’d be fine with a rule that says that you just have to build in any style from before 1945.