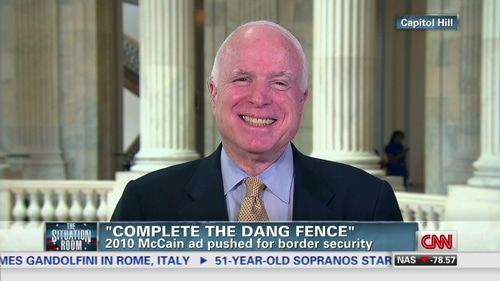 Will The Real McCain Please...Go Away?

This is McCain saying "Complete The Dang Fence," a recent campaign ad which has received a lot of criticism, as an act of desperation:

This is McCain in Vanity Fair:

Then he added, unable to help himself, "By the way, I think the fence is least effective. But I'll build the goddamned fence if they want it."[Prisoner of Conscience, February 2007]

This is McCain in a 2007 debate, saying "America is still the land of opportunity, and it is a beacon of hope and liberty and, as Ronald Reagan said, a shining city on the hill,and we're not going to erect barriers and fences."

This a Young Republican who wasn't allowed to hold up a sign saying "Build The Fence" in the Republican National Convention—the Secret Service told him, on behalf of the McCain Campaign, to take it down:

So, which is the real McCain? The answer is that there is no real McCain, and there never has been. Our final video is Peter Sellers on the Muppet Show as Queen Victoria. When Kermit tells him he can relax and be himself, Sellers replies:"There is no me. I do not exist. There used to be a me, but I had it surgically removed."