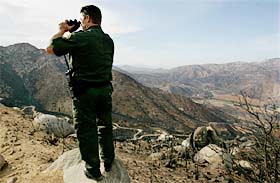 The topic of the illegal alien destruction of our healthcare system has been around for years. Jose comes to America "to work," gets injured in some way and ends up in the hospital on the taxpayer's tab.

(In fact, some Mexicans admit they come for the free medical care mandated by Washington as well as to deliver their meal-ticket jackpot babies.)

During the recent devastating wildfires, numerous Mexicans lurking in the San Diego hills did not heed the warnings of their consulate to flee. On the Mexican side coyotes recommended the fire emergency as a good time to cross because of all the confusion.

The upshot is that a lot of taxpayer money will pay for the long-term medical care of illegal alien Mexicans in the burn unit.

The fact that 11 of the 18 wildfire victims lying in UCSD Medical Center's burn unit are illegal immigrants with no apparent health coverage highlights the daunting financial challenge hospitals face in providing long-term, intensive care for all those who need it.

"These are the most expensive kinds of cases, but we don't look at these patients and say, oh, because they aren't legal residents, we'll stop providing care or stop changing their bandages,” said Dr. Thomas McAfee, UCSD's physician-in-chief. ”It's part of our ethic to continue to provide this care no matter what." [11 of 18 in burn unit undocumented: UCSD cases put focus on who pays for care, San Diego Union Tribune 10/31/07]

What a ridiculous thing to say, particularlly since Dr. McAfee gets money to provide care for illegal foreigners. He directly benefits from the current system that has cost taxpayers billions of dollars every year.

Last year, the average cost of treating a burn patient at UCSD was $45,000 for an average 15-day stay.

While on the subject of large sums of money, consider also that southerly remittances from the county are huge: S.D. County remittances to Mexico hit $1.1 billion [San Diego Union Tribune 10/19/07].

The amount of money that workers in San Diego County send to Mexico has ballooned - reaching $1.1 billion last year from $800 million in 2004, according to a new estimate by the World Bank.

If Mexicans have that much spare cash rattling around, they are obviously not being taxed enough. As I wrote in a 2002 Washington Times op-ed, taxing remittances at the point of transfer could raise money to ease the burden on the American healthcare system.

Remember that a taxation strategy worked well against another criminal, Al Capone.