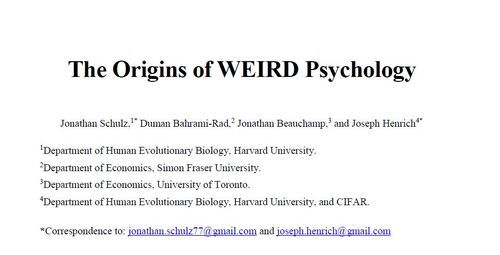 Why We Westerners Are WEIRD--Less Inbreeding

The Origins of WEIRD Psychology

Recent research not only confirms the existence of substantial psychological variation around the globe but also highlights the peculiarity of populations that are Western, Educated, Industrialized, Rich and Democratic (WEIRD). We propose that much of this variation arose as people psychologically adapted to differing kin-based institutions—the set of social norms governing descent, marriage, residence and related domains. We further propose that part of the variation in these institutions arose historically from the Catholic Church’s marriage and family policies, which contributed to the dissolution of Europe’s traditional kin-based institutions, leading eventually to the predominance of nuclear families and impersonal institutions. By combining data on 20 psychological outcomes with historical measures of both kinship and Church exposure, we find support for these ideas in a comprehensive array of analyses across countries, among European regions and between individuals with different cultural backgrounds.

The medieval Catholic Church was against Catholics marrying even moderately distant cousins and other kin, which HBD Chick has long argued is a key reason why Westerners are the way they are (Western, Educated, Industrialized, Rich and Democratic: WEIRD).

A growing body of research suggests that populations around the globe vary substantially along several important psychological dimensions, and that people from societies characterized as Western, Educated, Industrialized, Rich and Democratic (WEIRD) are particularly unusual (1–6).

While these patterns are now well documented, efforts to explain this variation from a cultural evolutionary and historical perspective have just begun (13–20). Here, we develop and test a cultural evolutionary theory that aims to explain a substantial portion of this psychological variation, both within and across nations. Not only does our approach contribute to explaining global variation and address why WEIRD societies so often occupy the tail ends of global distributions, but it also helps explain the psychological variation within Europe—among countries, across regions within countries and between individuals with different cultural backgrounds within the same country and region.

Our approach integrates three insights. The first, drawing on anthropology, reveals that the institutions built around kinship and marriage vary greatly across societies (21–23) and that much of this variation developed as societies scaled up in size and complexity, especially after the origins of food production 12,000 years ago (22, 24–29). In forging the tightly-knit communities needed to defend agricultural fields and pastures, cultural evolution gradually wove together social norms governing marriage, post-marital residence and in-group identity (descent), leading to a diversity of kin-based institutions, including the organizational forms known as clans, lineages and kindreds (21, 27, 30).

The second insight, based on work in psychology, is that people’s motivations, emotions, perceptions, thinking styles and other aspects of cognition are heavily influenced by the social norms, social networks, technologies and linguistic worlds they encounter while growing up (31–38).

In particular, with intensive kin-based institutions, people’s psychological processes adapt to the collectivistic demands and the dense social networks that they interweave (39–43). Intensive kinship norms reward greater conformity, obedience, holistic/relational awareness and in-group loyalty but discourage individualism, independence and analytical thinking (41, 44). Since the sociality of intensive kinship is based on people’s interpersonal embeddedness, adapting to these institutions tends to reduce people’s inclinations towards impartiality, universal (non-relational) moral principles and impersonal trust, fairness and cooperation.

Finally, based on historical evidence, the third insight suggests that the branch of Western Christianity that eventually evolved into the Roman Catholic Church—hereafter, ‘the Western Church’ or simply ‘the Church’—systematically undermined the intensive kin-based institutions of Europe during the Middle Ages (45–52). The Church’s marriage policies and prohibitions, which we will call the Marriage and Family Program (MFP), meant that by 1500 CE, and likely centuries earlier in some regions, Europe lacked strong kin-based institutions, and was instead dominated by relatively weak, independent and isolated nuclear or stem families (49–51, 53–56).

This is one of the great forgotten achievements of history: the Dark Age Catholic Church’s detribalizing the militant tribes that overturned the Roman Empire. In England, nobody worries about Angles and Saxons being at each other’s throats, whereas in much of the rest of the world, the tribes of 600 AD are more or less the tribes of 2018 AD.

On the other hand, there are probably cultural remnants left over from old tribes. For example, the WEIRDest of the WEIRD places in Europe with what are called the “absolute nuclear family” structure tends to be the old Anglo-Saxon regions.

The most nuclear of family structures was found around the North Sea in England, especially Eastern England, parts of the Netherlands, Denmark, and other places associated with the Anglo Saxon invasions of England during the Dark Ages. (Although judging by Beowulf, Anglo-Saxons had not yet developed their intensely nuclear family structures yet. But subsequent evidence suggests this tendency had emerged by 1200 AD or earlier.) British Tory MP David Willetts wrote:

“Instead, think of England as being like this for at least 750 years. We live in small families. We buy and sell houses. … Our parents expect us to leave home for paid work …You try to save up some money from your wages so that you can afford to get married. … You can choose your spouse … It takes a long time to build up some savings from your work and find the right person with whom to settle down, so marriage comes quite lately, possibly in your late twenties. ”

Protestants tended to see bans on cousin marriage as Papist superstition. But there wasn’t much cultural momentum for cousin marriage, so it remained fairly rare in post-Catholic Protestant areas.

On the other hand, the upper ranks of society had more property to conserve, so the advantages of inbreeding in terms of property concentration appealed to them.

The sickliness of Darwin’s inbred children raised Darwin’s concerns, and he delegated to one of his ten kids to investigate. But the son reported back: nothing to worry about, Pater.

Also, cousin marriage tended to be more common higher up in European society, especially among royalty, so it was subversive to the social order to cast doubt on the pracctice.

Darwin’s half-cousin Francis Galton had some concerns about inheritance of infertility. Galton’s American followers, the eugenicists, began to investigate the downside of inbreeding and helped bring about the intense American aversion toward cousin marriage, which ties in to American anti-royal republicanism.

So far, the American aversion toward inbreeding, which has been confirmed over and over by recent data, has not been tarred with the eugenics brush, but that seems like only a matter of time.

The return of cousin marriage to northwest Europe with mass immigration poses not just health but cultural/social challenges.

By the way, here is HBD Chick’s latest working theory:

viscous populations and the selection for altruistic behaviors