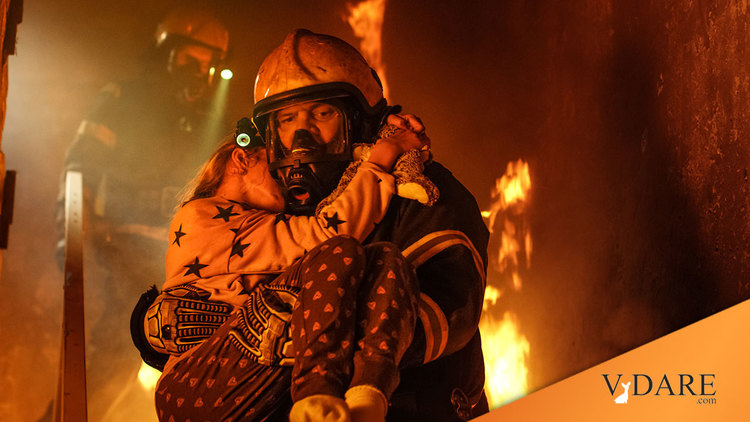 Why The Ricci Case Is The Exception Instead Of The Rule

Here's an old column I wrote in for Taki's Magazine on May 20, 2009, that I forgot to post a link to because I was traveling:

Following up on Jared Taylor’s article, the Ricci reverse discrimination lawsuit now before the Supreme Court is not one of those “hard cases” about which law students are warned. There is nothing anomalous about the discrimination against the New Haven firemen who had their top scores in the 2003 civil service exam thrown out by the city because no blacks scored high enough to get promotions. Employment decisions being rigged to prevent “disparate impact” on “protected minorities” is just business as usual in America since the 1970s.

Instead, what’s unusual is that we’re even hearing about the victimization of these unprotected majorities.

I suspect that’s largely because Frank Ricci and his friends are firemen. Fire fighters show up more than any other profession in prominent reverse discrimination suits, perhaps because they enjoy civil service protection, unions, and, most of all, public admiration.

In a culture that increasingly holds blue-collar workers in contempt, firemen are the exception to the rule. They risk their lives for you, and they don’t give you speeding tickets. As the cops in Joseph Wambaugh’s LAPD novels are always telling each other: If you really wanted people to like you, you should have been a fireman.

It’s worth exploring some of the more subtle game theory reasons why there is so little public outcry against discrimination against white males other than fire fighters. Why is Ricci close to being the exception that proves the rule?

For example, although white guys who are already firemen have a fighting chance of staving off unfair treatment in promotions, white guys who just want to become firemen are discriminated against in hiring with impunity. For example, a couple of years ago, the Bush Administration sued the New York fire department, which lost 343 men on 9/11, for discrimination because its entrance exam had a one standard deviation gap in its passing rate between whites and blacks, the same cognitive racial gap seen more or les everywhere.

The message the Bush Administration’s lawsuit was implicitly sending the FDNY was: “Hire more minorities and fewer whites. We don’t care how you do it. Just do it.” Cheating an already employed white fireman out of a promotion is dicey because he doesn’t go away. He’s still a fireman. So he hangs around, he complains, he organizes other white firemen to complain to their aldermen about why the politicians aren’t releasing the results, maybe he talks his sister-in-law’s cousin who is a file clerk in Personnel into Xeroxing the secret results of the test and leak it to him. And then he hires a lawyer.

In contrast, cheating some random white guy off the street out of his lifelong dream of being a fireman is a piece of cake: “Don’t call us, we’ll call you.” What can this marginal man do about his suspicions? Not much. He’s not connected.

Moreover, announcing that you are a victim of affirmative action is to admit you are marginal, that you would have only barely made the cut anyway. How uncool is that?

Similarly, affirmative action, by definition, doesn’t impact those who made the cut. Consider Harvard students. While some freshmen may enter Harvard sore that affirmative action might have cost high school friends admission to Harvard, soon they have lots of swell new friends, who, unsurprisingly, are all Harvard students, unlike those losers they used to hang around with in high school who didn’t have what it takes to get into Harvard.

Hence, you don’t see a lot of solidarity in opposing affirmative action.