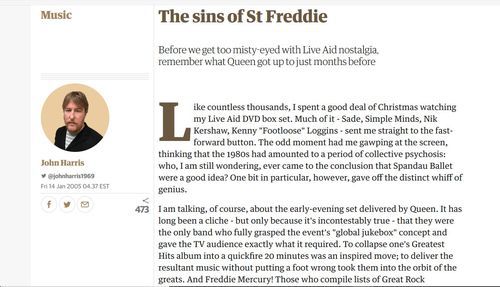 Why Freddie Mercury Wasn't an SJW

In my new Taki’s Magazine review of the biopic Bohemian Rhapsody about Queen’s lead singer Freddie Mercury, I mentioned:

Queen came back more in fashion with a fine set at the 1985 Live Aid benefit for starving Ethiopians, which provides the climax of the film.

Freddie’s royalism was reflected in his naming the band Queen. That wasn’t just a gay joke, it was also a tribute to the British Empire’s monarchical system under which his Parsi ancestors had prospered so remarkably (e.g., two Parsis represented London constituencies in the British Parliament under Queen Victoria). Here’s Mercury’s design for Queen’s logo, with each member represented by his astrological sign, such as Leo and Cancer, and Freddie by two fairy Virgos:

Freddie’s reticence in interviews is usually attributed to his trying to cover up his gayness (although if that were really a priority for him, he probably shouldn’t have named the band “Queen”). But it’s possible he was also cautious about talking to journalists for fear of saying something politically incorrect.

Freddie and his family had had to flee Zanzibar’s bloody 1964 black-power revolution, so perhaps he had personal reasons for not giving a damn about the racial obsessions of the age. For example, Bob Geldof almost didn’t invite Queen to Live Aid because in 1984 they’d violated the U.N.’s boycott of apartheid South Africa by playing Sun City.

Freddie’s Parsi parents had been born in India outside of Bombay and moved to Zanzibar for his father’s career with the British Colonial Office. Freddie was born in Zanzibar in 1946. He mostly attended a veddy English upscale boarding school back in India, where he was a Little Richard fan and formed his first rock ‘n’ roll band in the late 1950s.

Commenter Almost Missouri points out this seven minute clip from the Italian 1966 mondo-documentary Africa Addio that is history’s only video from the 1964 massacre by black power revolutionaries of non-blacks, like Freddie, on Freddie’s native Zanzibar:

“Africa Addio” is a brutal, dishonest, racist film. It slanders a continent and at the same time diminishes the human spirit. And it does so to entertain us.

But even Ebert had to admit:

Some of the footage, notably aerial shots of the Arab massacre in Zanzibar, is doubtless truthful.

Freddie no doubt believed it. Seventeen-year-old Freddie and the rest of his Parsi nuclear family, the Bulsaras, fled Zanzibar in early 1964 — whether before or after the massacres, I can’t tell for sure — to avoid black rule and as British citizens found a new home in England. The formerly independent island of Zanzibar was incorporated into rule by the Tanzanian mainland.

Freddie, despite all of his globe-trotting, never returned to visit his native island.
[Comment at Unz.com]