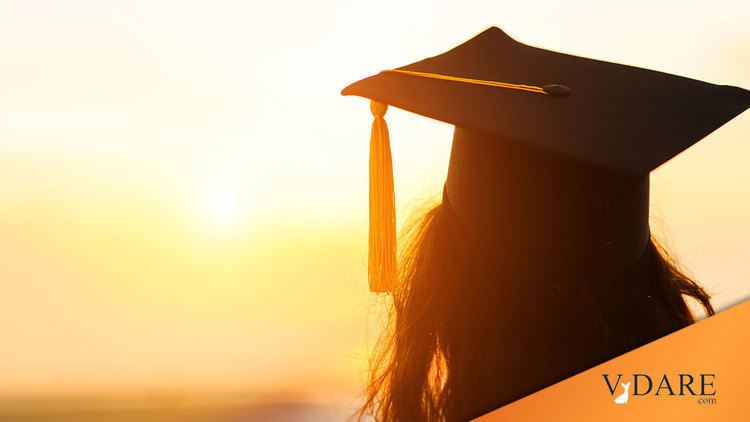 In my Taki's column about a lesbian feminist dean's campaign to stop women students at Harvard Business School from acting sexy to attract the men students—all for the putative purpose of helping the female students close the Grade Gap, not out of lesbian resentment, of course—I mentioned that I don't recall MBA program grades being terribly important.

My XXXX went to Wharton for her MBA and she was not allowed to disclose her grades on job interviews, (which she found annoying as she was in the top 5% of the class, exception that proves the rule, I guess).

This is true at Booth, Stanford, Columbia and most of the other top Business School programs, though I think it doesn't exist at Harvard; though (they had non disclosure until recently).  Regardless, your intuition that grades don't matter much at elite business schools is correct.

The idea is that these schools want the best employment statistics and by nature of being at a top business school most people could get some good jobs.

However, some employers would be reluctant to hire the bottom of the barrel, even if it's a high quality barrel.  The people at the very top can usually manage to find a way to distinguish themselves, but no one is the worst.

You can't get away with this if you aren't a top school, though.

My recollection of B-School was that it was more fun than hard. I worked intensely on the courses I admired, but was content to get Bs in the more bogus ones. (That said, I presume that if you want to be, say, a Wall Street rocket scientist, you should work very hard in the hardest B-School classes, since your competition is STEM grad students.)

Here's a Freakonomics post by Matthew Philips on the subject:

A new paper from a pair of Wharton economists examines why this is. Wharton, it should be noted, has grade non-disclosure, and while the faculty (according to the authors) is fairly vocal in its opposition to the policy, it’s typically approved by the students each year by a wide majority. The paper begins with a discussion of what economists call signalling, where trusted information is transferred through signals we send. The job market is one of the leading areas where we do this, as explored by economist Michael Spence in his 1973 signalling model. The idea is that without knowing whether you’re good at a job like valuing bonds or putting together marketing proposals, employers rely on the signal we send by way of an MBA from a top business school.

Students typically argue that non-disclosure policies allow them to take greater risks and harder courses without having to worry about an embarrassing transcript. ...

As long as employers keep valuing a degree from Harvard Business School over MBA’s from mid-tier programs, grade non-disclosure policies aren’t likely to go away. Are we surprised then that the smartest business students in the country have figured out a way to game the system in their favor?

Isn't it wonderful how American elites make life easier for themselves at the expense of the less elite?

Another feature of the ease of B-School versus the other professional school rivals is that there are no licensing exams, like there are for lawyers, doctors, and accountants.

So, whenever I read discussions about how we need more affirmative action in law schools and medical schools, I ask: Why work harder to lure marginal black and Hispanic kids into expensive educations where they might repeatedly flunk the licensing exam? (I don't believe there is any affirmative action on bar and medical board exams, while there is plenty in admission.) Let them go instead to business school, where there are no high stakes post-school tests.