With all the media sob stories about the supposed travails of illegal aliens, it’s refreshing to see a tiny bit of attention focused on legal immigrants. Law-abiding entrants get little respect from Washington elites and campaign consultants, even after the people who came the right way have spent tens of thousands of dollars to pursue immigration.

For example, the formerly Canadian Sweazey family, pictured below, spent $45,000 to become Americans. 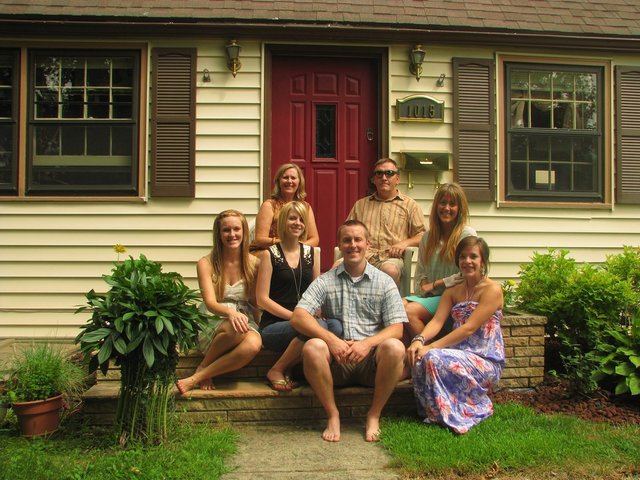 So much in the country now seems upside down — but nowhere more so than in the twisted world of immigration politics, where foreign lawbreakers are more privileged than citizens and legal immigrants.

When Lucinda Sweazey’s family immigrated from Canada in 1999, it took seven years and an estimated $45,000 in legal, passport and visa fees for her parents and siblings to secure permanent resident status in the U.S.

“Our lawyer even mentioned to us when we were going through the process legally that it would have been easier if we came in illegally. We would have saved money, and there’s a good chance we would be citizens by now,” Ms. Sweazey said.

Now an undergraduate student at the King’s College in New York City, the British Columbia native said the massive immigration overhaul working its way through the Senate could make a “mockery of legal immigration.”

If lawmakers offer a shortcut to citizenship for millions of illegal immigrants, she said, “it becomes rather discouraging to someone who came legally.”

Ms. Sweazey and other legal immigrants are voicing concerns that providing amnesty for those who arrived illegally will only encourage more of the same.

“We should not reward people for breaking the rules while we maintain burdensome rules for immigration,” said Liye Zhang, a software engineer in Castro Valley, Calif., who emigrated from China when he was 10.

Mr. Zhang, a strong opponent of amnesty, noted that one of his co-workers plans to obtain a master’s degree in order to get into “a slightly shorter line” for a green card — a process that ultimately will cost more than $300,000 in tuition and loss of salary.

“Giving green cards to illegal immigrants while not giving them to these people seems very much stupid and foolish,” Mr. Zhang said.

Mr. Zhang’s father secured a job in the U.S. in 1999 as a software engineer and obtained visas for his immediate family. Although they pursued citizenship as soon as they could, it took Mr. Zhang seven years to become a citizen.

“The process was long and exhausting,” he said, recalling his visits to immigration offices in San Francisco, many of which required early morning travel and long hours in lines. “It cost a great deal of money even though I am unsure how much precisely it was.”

In 2012, roughly 1 million people obtained legal permanent resident status and 750,000 received naturalization in the U.S., according to Department of Homeland Security numbers.

That is far fewer than the estimated 11 million people living in the country illegally.

Of those 11 million, 1.4 million qualify as “Dreamers” — illegal immigrants brought to the U.S. as children who have been offered a temporary reprieve from deportation by the Obama administration.

Deferral applications for the Dreamers are expected to further slow approvals for the 4.4 million people worldwide waiting for green cards, according to the Center for Immigration Studies.

The backlog for those going through the process legally is expected to grow: Over the next 10 years, the immigration bill is expected to help legalize 32.5 million to 33.5 million people, including the 11 million current illegals, according to estimates by the left-wing Center for American Progress and NumbersUSA, which opposes the bill.

Looking for a solution
Supporters say the population boost will help the economy, and the path to citizenship will help solve one of the nation’s most vexing legal problems. And don’t call it amnesty, they say.

Rep. Paul Ryan, Wisconsin Republican, points to provisions in the bill that require illegal immigrants to undergo background checks, pay taxes and a fine, and wait for a probationary period before obtaining citizenship, which can take up to 15 years.

“Earned legalization is not amnesty,” he said during an immigration forum last week sponsored by the National Association of Manufacturers. “I will debate anybody who tries to suggest that these ideas that are moving through Congress are amnesty. They’re not. Amnesty is wiping the slate clean and not paying any penalty for having done something wrong.”

But Luis Pozzollo, a naturalized citizen from Uruguay, said the immigration bill is “plain amnesty” because it provides benefits for illegals such as in-state tuition, does not help stem illegal immigration and provides no efficient border security.

“Coming illegally to a country and breaking every law you can, misusing and abusing all the benefits in America, is not the way to get citizenship or a green card,” said Mr. Pozzollo, a safety and operations supervisor at an auto plant. “Citizenship for immigrants is a privilege, not a handout.”

Mr. Pozzollo arrived in Lexington, Ky., in 2003 on a work visa and waited several years to apply for his green card and then for citizenship. He was naturalized last year.

By considering amnesty for illegals, Congress will be taking away chances from qualified applicants and giving them to people, he said, who “failed to comply with American laws.”

When amnesty is acceptable
For Rachel Villarreal, an administrative assistant in Madera, Calif., the problem with the immigration system is that it encourages people to enter the country illegally to give birth so that their children will be legal citizens. She sympathizes with children and said amnesty should be acceptable for them.

“There has to be a date that they pick and stick to, so if you’ve been here 15, 12 years, those [get to stay] and the ones after that [don’t],” said Ms. Villarreal, whose elder siblings were born in Mexico. “But they need to stay firm with that date and not have to deal with the same situation 20 years from now.”

Other immigrants who have come to the country legally are more open to the proposed overhaul.

Michael Phillips, a pastor from Canada living in Sacramento, Calif., said amnesty would make illegal immigrants “a part of the system” and require them to abide by American laws.

Mr. Phillips was able to obtain green cards for his family of six fairly quickly when they moved from Vancouver in 1989 because another family of six happened to drop out of the waiting list. The pastor said he knows many people who are undocumented and has no problem with giving them legal status.

“My encouragement to them is to seek every means to become documented,” Mr. Phillips said. “I can see it being a very good thing.”