Why Do We Laugh?

In the Times Literary Supplement, Tim Lewens reviews a book on humor by three philosophers: Inside Jokes: Using humor to reverse-engineer the mind by Matthew M. Hurley, Daniel C. Dennett and Reginald B. Adams, Jr.

All of the usual suspects have their shortcomings. Surveys typically list three broad varieties of humour theory: superiority theories, release theories and incongruity-resolution theories. Superiority theories say that humour illustrates the inferiority in some respect of the joke’s butt, provoking laughter as a sort of small triumph in the superior witness. This works well in some cases, but struggles to account for “butt-less” humour such as puns, or the kinder forms of imitation. Release theories have a Freudian pedigree: humour provides a sort of relief from a build-up of nervous tension. Again, it is not clear that one can plausibly think of simple puns as having such therapeutic functions, and many of today’s cognitive scientists are sceptical of the more general hydraulic metaphors used to depict build-up of energy, overflow, release and so forth. Incongruity-resolution theories are more popular: they assert that humorous situations involve the presentation of an incongruity that is subsequently resolved. Here we might be concerned about whether “incongruity” and “resolution” are understood in suitably precise ways: without such tightening, the theory seems vulnerable to counter-example. In The Emotions and the Will (1875), Alexander Bain complained that “There are many incongruities that produce anything but a laugh”, and went on to list many examples that are not funny, and that would remain unfunny even if they were, in some sense, resolved: “snow in May, Archimedes studying geometry in a siege; . . . a wolf in sheep’s clothing; . . . a corpse at a feast, parental cruelty”.

Actually, those examples of unfunniness sound pretty funny to me. A wolf in sheep's clothing is a standard for cartoonists, such as Gary Larson's Far Side panel where an entire flock consists of wolves wearing blatantly phony sheep disguises and one disgusted wolf, fake head under his arm, says to another, "Wait a minute! Isn't anyone here a real sheep?" (Warning: Far Side cartoons likely to disappear off the Internet.)

Perhaps the more that something seems comic rather than tragic is a sign of economic progress?

As for snow in May, admittedly, that wasn't as funny back in a more Malthusian age when it was likely to wipe out your crop and put your family in the poorhouse. But in Seventies Southern California, it was pretty hilarious. As Woody Allen pointed out in Annie Hall, most things in 1970s SoCal were pretty funny.

On May 28, 1977, my friend Steve (yes, it was a common name, mid-century) and I started backpacking from Crystal Lake above Azusa in the L.A. sprawl.

We started up the dry south-facing slope of the San Gabriel Mountains under a scorching sun on our way to Little Jimmy Camp at 7,500 feet elevation over the Angeles Crest onto the north-facing slope. 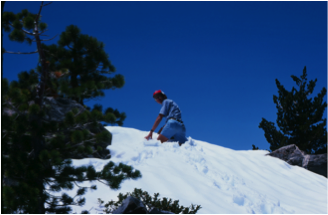 What we found to our surprise when we reached the pass was that the north side of the mountains on Memorial Day weekend were covered with two feet of snow, and we hadn't packed anything warmer than those embarrassingly short shorts that were in fashion in 1977. You can crack up Steve to this day by reminding him of this snowy May campout I dragged him on.

I presume laughter has a variety of causes (as, clearly, do tears, although philosophers seem less baffled by crying than laughing). So, there's no apparent need for an all-purpose explanation. Still, I would suggest that humor often serves as a sort of brain candy to reward noticing stuff. For example, ever since I've been fairly obsessive in thinking about which directions slopes face.

I learned my lesson.