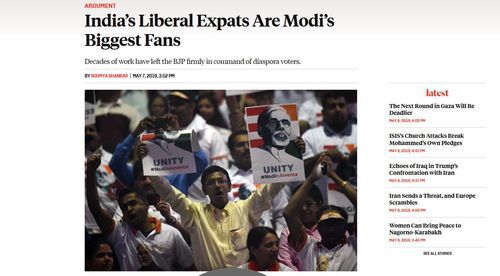 Why Do Indian-Americans Vote Right at Home and Left in the USA?

… As the marathon general elections play out in seven phases across the country, many of the 4 million nonresident Indians (NRIs) in the United States are setting aside work and family to campaign for their favorite candidates….

With the growing influence of the Indian diaspora in the United States, how it votes at home matters. The 4 million Indian Americans are the wealthiest and most educated ethnic group in America

You hear all the time that Indians are the “wealthiest ethnic group,” but a few quibbles:

– the cited references are always to studies of “income” rather than of “wealth,” which are two quite different concepts. Wealth can be studied from well-known resources such as the Forbes 400, but in the U.S. mainstream press, that’s just not done.

– Nonetheless, Indian Americans tend to be quite high income, even if the “wealthiest” stuff is basically a smokescreen

—with a median income almost double that of an average American household.

In U.S. politics, people of Indian origin skew Democratic—77 percent of the community voted for Clinton in the 2016 race. In a dichotomy that has left many scholars puzzled, a large number of them are supporters of right-wing politics in India.

… According to Sangay Mishra, an assistant professor of political science at Drew University and author of Desis Divided: The Political Lives of South Asian Americans, the traditional voter base of the BJP merges well with the current demographic makeup of the Indian diaspora. “People likely to vote for BJP are middle-class and upper-caste Hindus,” he said, adding that they are also the majority of emigrants. “The BJP has always been a strident nationalist position, and within that you see a particular variant of Hindu nationalism, which has a peculiar kind of appeal for this section of the diaspora.”

According to Swain, it is only natural that the diaspora would align with a right-wing nationalist ideology back home owing to their “professional backgrounds in information technology and the computer sciences, with almost no training in the humanities.” …

Recently, External Affairs Minister Sushma Swaraj addressed NRIs from around the world, promising them a right to remote voting, a desperate concern for and key demand of the diaspora. …

The Congress party, the BJP’s main opponent, has been relegated to minimal influence among the diaspora, except for the Gulf countries, where it has a far wider influence due to the presence of the vast Muslim and Christian populations from the southern states of Tamil Nadu and Kerala in these regions. …

The post-independence Congress government under the leadership of Jawaharlal Nehru followed a conscious policy of “active disassociation” with the Indian diaspora, based on the dangers of nurturing and advocating for the diaspora at the cost of their host countries’ sovereignty.

That was naive, Jawaharlal! Didn’t you know it’s racist for the indigenous of the host countries to have any objections to any unfair activities of immigrants?