This is from NewsBusters: 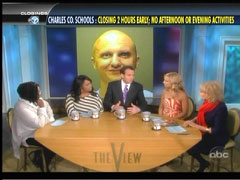 "The View's Whoopi Goldberg on Tuesday compared today's political environment to that of when she was a child, talk that led to people get "lynched." Discussing Last week's Arizona shooting, she warned, "When I was growing up, people talking and saying things, whipping folks up, caused a lot of people to get lynched."

Continuing this theme, she added, "Now, had those people not done all that, would it have happened any way? It may have. I don't know. But I do know that sometimes we, as a society, have to sort of be aware of what we are doing."

(Of course, Goldberg's historical analogy falls apart when you consider the fact that she was born in 1955 and grew up in the '60s, a time when lynchings were at a historical low.) "

Whoopi Goldberg (it's a stage name—both her parents were black) grew up in the Chelsea neighborhood of Manhattan. I don't think there has been a lynching in Manhattan since the immigrant led draft riots of the 1860's. IN fact, from what I can recall, when and where Ms. Goldberg was growing up, "people talking and saying things, whipping folks up, caused a lot" of race riots.

And the riots that happened in Manhattan happened in a city  that had been on the winning side in the civil war, where blacks had the vote, where there were black policemen and black city council members. What caused these riots? Was it oppression, like they had in the Jim Crow South, where blacks had no right to vote? No, it was people like Malcolm X "talking and saying things, whipping folks up."