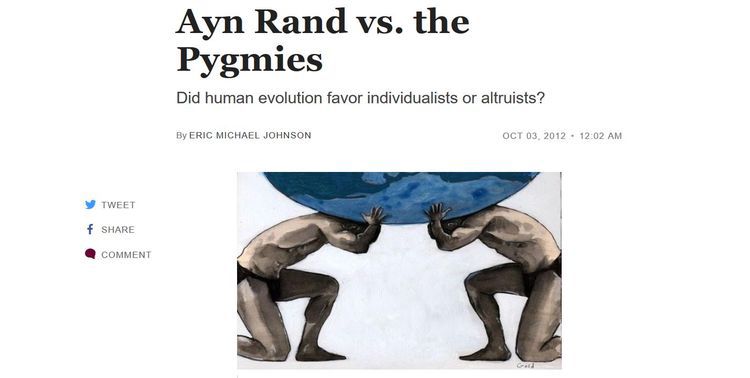 Who Was Right About Human Nature: Ayn Rand Or Colin Turnbull?

Ayn Rand vs. the Pygmies

Black-and-white colobus monkeys scrambled through the branches of Congo’s Ituri Forest in 1957 as a small band of Mbuti hunters wound cautiously through the undergrowth, joined by anthropologist Colin Turnbull. The Mbuti are pygmies, about 4 feet tall, but they are powerful and tough. Any one of them could take down an elephant with only a short-handled spear. Recent genetic evidence suggests that pygmies have lived in this region for about 60,000 years. But this particular hunt reflected a timeless ethical conflict for our species, and one that has special relevance for contemporary American society.

The Mbuti employed long nets of twined liana bark to catch their prey, sometimes stretching the nets for 300 feet. Once the nets were hung, women and children began shouting, yelling, and beating the ground to frighten animals toward the trap. As Turnbull came to understand, Mbuti hunts were collective efforts in which each hunter’s success belonged to everybody else. But one man, a rugged individualist named Cephu, had other ideas. When no one was looking, Cephu slipped away to set up his own net in front of the others. “In this way he caught the first of the animals fleeing from the beaters,” explained Turnbull in his book The Forest People, “but he had not been able to retreat before he was discovered.” Word spread among camp members that Cephu had been trying to steal meat from the tribe, and a consensus quickly developed that he should answer for this crime. ...

At an impromptu trial, Cephu defended himself with arguments for individual initiative and personal responsibility. “He felt he deserved a better place in the line of nets,” Turnbull wrote. “After all, was he not an important man, a chief, in fact, of his own band?” But if that were the case, replied a respected member of the camp, Cephu should leave and never return. The Mbuti have no chiefs, they are a society of equals in which redistribution governs everyone’s livelihood. The rest of the camp sat in silent agreement.

Faced with banishment, a punishment nearly equivalent to a death sentence, Cephu relented. “He apologized profusely,” Turnbull wrote, “and said that in any case he would hand over all the meat.”

Okay, but best-selling anthropologist Colin Turnbull, who is treated as an objective authority in this article, is one of the few writers even wackier than Ayn Rand. Turnbull was a big deal back in the day. For example, the Royal Shakespeare Company, under the direction of his friend Peter Brook, toured with a play based on his second field study.

Turnbull wrote two well-known books on Africa, The Forest People(about his beloved Mbuti pygmies) and The Mountain People (about the Ik, whom he demonized as "the worst people on Earth" and demanded that they be culturally exterminated).

What motivated such unbalanced books?

Roy Richard Grinker's biography of Turnbull is called In the Arms of Africa. Here's Grinker's summary of Turnbull's view of the Mbuti pygmies in The Forest People:

Turnbull found the Mbuti to have social institutions more humane and more sophisticated than anything that existed in western civilization. As described in The Forest People, Mbuti children are never pitted against one another. People live in harmony not because they are coerced to do so by laws, the threat of violence, or other external impositions, but because of an internal desire for unity, reciprocity, and social equality ... Mbuti teenagers, he wrote, practice sex freely and yet have no unwanted pregnancies ... In addition, for Turnbull, the Mbuti's apparent subordination to the neighboring farmers was only playacting. The Mbuti pretended to be inferior when they were, in fact, far superior in almost every way.

Turnbull's second bestseller, The Mountain People, is quite a contrast:

Why the sudden switch to a Stalinoid approach to some poor tribe? (There's a recent documentary, Ikland, about the Ik, which shows they are a pretty routine people and not the depraved monsters of Turnbull's bestselling imagination.)

The title of the biography of Turnbull is In the Arms of Africa and that is not metaphorical. Turnbull died of AIDS in 1994.

Turnbull's book about the pygmies was a Big Gay Ecstasy about a tribe that had furnished him with a boy for a bedmate. The first chapter of Grinker's biography of Turnbull, as published in  the New York Times in 1997, is largely gay pedo-porn. Here's the book's opening paragraph:

On most mornings in 1957, the Scottish anthropologist Colin Macmillan Turnbull would wake up in his hut next to his young Mbuti assistant, Kenge, their legs and arms intertwined in the way that Mbuti men like to sleep with each other to stay warm. At four foot eight, Kenge was more than a foot and a half shorter than Colin, so Colin could hold him easily with his long legs, arms, and wide hands, keeping them both warm in the damp forest nights.

And it just gets creepier from there in its loving description of the Jerry Sandusky of leftist anthropology.

The Mountain People, in contrast, is a Big Gay Snit about how much Turnbull loathes the Ik, especially for not providing him with a boy toy. Grinker writes:

Turnbull hated the Ik. The Pygmies, and even Joseph Towles [Turnbull's African-American boyfriend] (who had begun his training as an anthropologist), empowered him. But because he could do little to stop the famine and social behaviors that emerged in that context, the Ik threatened his role as protector or saviour. Because they did not seem to respect him or care for him, the Ik never gave him the sense of self-worth he derived from Joseph and other underdogs. And because the Ik never gave him someone like the Pygmy young boy, Kenge, whom he could love and idolize, he grew angry and lonely.

You might expect from my extracts that Grinker's biography of Turnbull is a devastating takedown, but the bulk of it is pretty much hagiograpy, which goes to illustrate a lot about cultural power. Grinker got his initial draft rejected by his editor on the grounds that a straight man shouldn't be writing a biography of a gay hero. So, he gayed up his manuscript and got it through.

In the intellectual realm, one way power is exercised is in rewriting the past. For example, Francis Galton was, by any objective standard, one of the more creative geniuses in human history, but he is routinely demonized today. In contrast, this Turnbull fellow was a trainwreck, whose influence in the latter half of the 20th Century is of interest mostly from a clinical standpoint of figuring out why so many intellectuals went so far off the tracks. But, that's not a subject of approved interest today.

There are a few general points worth making about anthropological field work. Few anthropologists are as nuts / evil as Turnbull, but still ...

First, it's not that easy to stay wholly sane in the bush. Westerners can turn into their own versions of Mistah Kurtz.

Second, anthropologists get lonely. One anthropologist studying the Yanomamo, Kenneth Good, married a 15-year-old native, had three children with her, and tried to take her back with him to suburban New Jersey. The Amazonian lass didn't make a smooth transition to Jersey Girl.

More seriously, a gay athropologist, Jacques Lizot, introduced sodomy to the boys of the tribe. This is the worst, but least publicized aspect, of the Yanomamo story.

Third, the most influential anthropology professors, the charismatic ones who most impress their personalities on their grad students, the ones whom cults of personality develop around in American academia, can have similar effects on the tribes they study. For example, Napoleon Chagnon, a third anthropologist to study the Yanomamo, author of The Fierce People about the Yanomamo is a fierce person himself, good man to have in your foxhole. If your platoon was cut off behind enemy lines and you had to fight your way out, you'd want Chagnon as your sergeant.

A fourth anthropologist who was with Chagnon with the Yanomamo told me, "He is a macho," and that the young Yanomamo males looked up to him as a role model. But, that raises a big question about Heisenbergian effects of charismatic researchers on their subjects. I sort of suspect that if Chagnon had decided to do a study of a local Pop Warner football team, he'd quickly wind up the coach, and his team would go undefeated and be renowned for their fierceness.