Who Put The Hood On Dr. Seuss?

The latest non-crime to inspire panic is some student prankster's idea to put a pillowcase, looking like a KKK hood, on the statue of Theodor Geisel (Dr. Seuss) outside the UCSD Library. I'm going to repeat the nature of the crime here, in case you missed it—a student put a pillowcase on a statue. Does that justify this headline?

SAN DIEGO —  Federal law enforcement agencies are now investigating a series of racially-charged incidents at UC San Diego. The most recent involves the discovery of a Ku Klux Klan-like hood on campus.

UCSD campus police found what appeared to be a white pillowcase made into a KKK-style hood Monday evening. That hood was placed on a statue in front of the university's main library. A noose was found inside the same library last week.[More]

I don't see why anyone should be frightened or worried about someone putting a pillowcase on a statue. White students aren't going to engage in mass violence at UCSD, where they're a minority anyhow.

Black students are only 2 percent of the population at this college, but that's because affirmative action is illegal in California, and you need good scores to get in.

And how do we know this wasn't put there by some Japanese-American who hates Geisel for his patriotic wartime cartoons? Here's one: 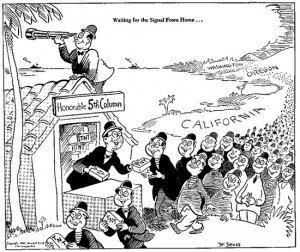 As a political cartoonist, Geisel was more or less of a Hubert Humphrey liberal on racial issues—except when it came to the Japanese, who were fascist. Putting a hood on Geisel could have been someone's way of saying that they thought he was a Klansman—and the Japanese Student Association at UCSD actually exists, unlike the Ku Klux Klan.