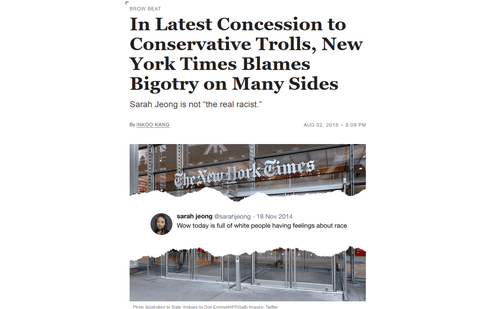 Who Defends Sarah Jeong? Inkoo Do 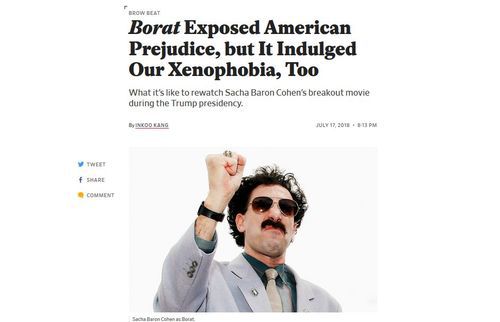 Twelve years later, we have higher standards for what counts as politically useful comedy. Borat no longer makes the cut.

Inkoo is back in Slate to declare that the output of new member of the New York Times Editorial Board Sarah Jeong and fellow Korean is politically useful comedy. So what are you complaining about, white boy?

Sarah Jeong is not “the real racist.”

Most of the time, being a writerr isn’t very fun, and being a writer of color is even less so. Being a writer is a privilege, but writing has always been lonely work. Even for those of us lucky enough to have full-time staff jobs, it can frequently feel isolating to be in a predominantly white setting, the only commonality between fellow writers of color often being our place on our companies’ bottom rungs. It’s no surprise, then, that writers of color (and those of other marginalized groups) have forged communities on Twitter and other social media platforms, where we can communicate in languages that don’t necessitate cultural or linguistic code-switching. …

But those communities now appear to be in danger. … To the pitchfork wielders on Twitter claiming that Jeong is the “real” racist here, the Times responded by treating their new hire like a disappointed parent: “For a period of time [Jeong] responded to [sexist and racist online] harassment by imitating the rhetoric of her harassers. She sees now that this approach only served to feed the vitriol that we too often see on social media. She regrets it, and The Times does not condone it.”

The Times’ bigotry-on-many-sides explanation is infuriating for a number of reasons. The first is that, as Splinter News’ Libby Watson notes, Jeong’s tweets were clearly jokes, not policy proposals.

But … they were Politically Useful and that’s what counts in the Current Year.

When people of color rail against white people, that’s often shorthand for speaking out against the existing racial structure that serves to keep white people in power. The jokes that people of color make at the expense of whites are furthermore not supported by past and present state and corporate institutions. A white American telling an Asian American to “go back to where you came from,” for instance, isn’t the same as an Asian American saying the same to a white American, even if neither individual can claim ancestral roots as America’s first residents. To claim otherwise is to be blind to the history and social dynamics of this country.

Of course, Sarah Jeong and Inkoo Kang are only in this country because 30,000 dead American soldiers saved South Korea from the tender mercies of the Kim Dynasty.

But that’s pretty much what the Times did with its explanation. It more or less validated the dangerous misconception that conservative trolls harassing a woman of color in a male-dominated field, an action that could potentially drive away even more marginalized voices, is equal to a woman of color joking about “canceling” white people, which carries no real-life weight because that doesn’t mean anything. White fragility is real, and so I’ll grant that some readers may have had their delicate skin stung by Jeong’s comments, but it’s more than likely that the very same trolls who tried to endanger Jeong’s position at the Times were acting in bad faith. The Times also ignores the fact that the current alt-right hysteria about besieged whiteness is also fuel for a violent movement that uses its power in the White House to justify inhumane and racist policies. …

As for the Times’ editorial board, it’s difficult not to notice how protective they’re being of white feelings at a time of renewed and active discrimination against people of color. Earlier this summer, the board published a treatise on the intellectual sidelining of the Jordan Petersons of the world. The following week, they put forth, practically back to back, pieces about how liberals’ meanness and smugness were responsible for a newly insurgent movement toward racism and misogyny. And earlier this week, a contributing writer essentially advised progressives to stop calling a racist person racist, at least to their face. It’s tempting to see the Times’ approach to the Jeong kerfuffle as tactical, given its older white readership who enjoyed decades in which people of color’s jokes about white people were forced to stay underground or out of earshot. But now is not the time to accommodate the already privileged.

In summary: Listen up! Even you moronic tall noses who haven’t studied the Theory of Intersectionality in college ought to be able to understand something so simple: You white people are Bad while we Korean Women Journalists of Color are Good, so we deserve to take what’s yours.

Too bad Inkoo isn’t a Dinka: