Whiteness Crisis At Obama HQ Postponed For The Duration 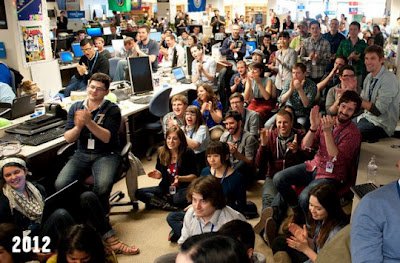 T
The Official "Girls" Fan Club celebrates another great episode! Oh, wait ...
Via Untethered, here's a picture of Obama Campaign Headquarters in Chicago from the Obama 2012 Tumblr account. There's definitely one African-American in the back row-center (a large man in a black shirt). There might be another black or two in the back row, but that appears to be about it. Please do click on the picture to see it full size.

Will the EEOC apply the Four-Fifths rule to THIS organization?

From a help wanted ad:

The Obama for America Analytics Department analyzes the campaign's data to guide election strategy and develop quantitative, actionable insights that drive our decision-making. Our team's products help direct work on the ground, online and on the air.

We are looking for Predictive Modeling/Data Mining Scientists and Analysts, at both the senior and junior level, to join our department through November 2012 at our Chicago Headquarters. We are a multi-disciplinary team of statisticians, predictive modelers, data mining experts, mathematicians, software developers, general analysts and organizers - all striving for a single goal: re-electing President Obama.

Using statistical predictive modeling, the Democratic Party's comprehensive political database, and publicly available data, modeling analysts are charged with predicting the behavior of the American electorate. These models will be instrumental in helping the campaign determine which voters to target for turnout and persuasion efforts, where to buy advertising and how to best approach digital media.

Our Modeling Analysts will dive head-first into our massive data to solve some of our most critical online and offline challenges. We will analyze millions of interactions a day, learning from terabytes of historical data, running thousands of experiments, to inform campaign strategy and critical decisions.

If the Obama for America Analytics Department doesn't hire at least four-fifths as many Hispanic females as Asian males, then Eric Holder is going to want to know why!

Here's the disclaimer at the end of last year's Obama quant ad:

Obama for America is committed to diversity among its staff, and recognizes that its continued success requires the highest commitment to obtaining and retaining a diverse staff that provides the best quality services to supporters and constituents. Obama for America is an equal opportunity employer and it is our policy to recruit, hire, train, promote and administer any and all personnel actions without regard to sex, race, age, color, creed, national origin, religion, economic status, sexual orientation, veteran status, gender identity or expression, ethnic identity or physical disability, or any other legally protected basis. Obama for America will not tolerate any unlawful discrimination and any such conduct is strictly prohibited.

I started working at a Chicago marketing research firm thirty years ago, doing similar work, and we always had a higher percentage of black employees than you see in this Obama Chicago HQ picture. My boss was black in 1986-1988.

People always say, "Who ever imagined a black man would be President?" Well, I always assumed it would happen. I was kind of surprised it wasn't Colin Powell in 1996. But I am surprised by this photo of the black President's campaign staffers. That's not something I would have forecasted a generation ago.

Mark Steyn talks about how 21st Century British pop stars, such as James Blunt, are much posher in upbringing than pop stars were in the Rod Stewart days. Blunt (officially, Blount; "Blunt" is just easier for the proles to pronounce) is an Old Harrovian and graduate of Sandhurst, who spent six years as an officer in the Life Guards, the senior regiment in the British Army. Wikipedia's bio of him features the greatest sentence of all time: "The Blount family has a long history of military service, dating from the 10th century." So, the Blounts are in their third millenium in the officer class.

Anyway, it appears that a lot of the key careers in culture and politics are getting more upscale.