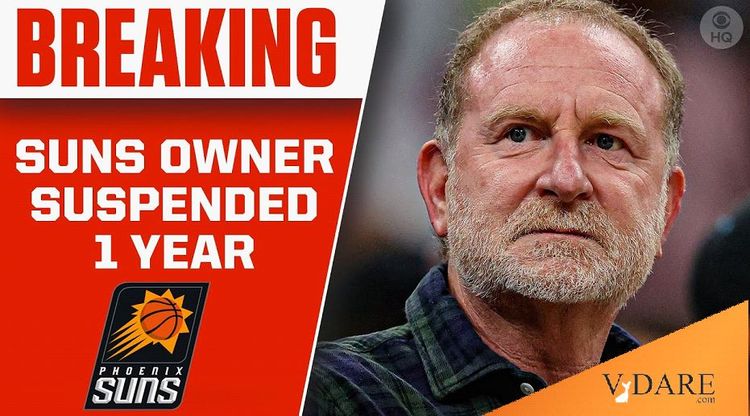 When the demand for racism and white supremacy required by the ruling elite to fuel their anti-white agenda far exceeds the supply, you sometimes have to manufacture a racial crisis…

The NBA levied a heavy fine and a year-long suspension Tuesday against Phoenix Suns owner Robert Sarver, after an investigation found he used racist language and fostered a hostile work environment, though the league did not require him to sell the team.

Sarver will pay a $10 million fine, the largest sum allowed under the NBA’s bylaws, and is suspended for one year from managing or representing the Suns and the WNBA’s Phoenix Mercury, which he also owns, the league said.

The NBA said it found Sarver said the N-word at least five times “when recounting the statements of others,” used derogatory language and sexually charged comments toward and about women and bullied employees.

The probe, which included 320 interviews and the examination of 80,000 emails, texts and videos, came after ESPN released a report on allegations of misconduct in November 2021.

Sarver will be required to undergo sensitivity training in his time away from his teams.

Sarver said last year he welcomed the NBA’s probe, but his legal team denied the allegations to ESPN at the time.

Sarver’s misconduct is reminiscent of former Los Angeles Clippers owner Donald Sterling, whom the NBA banned for life in 2014 when his racist comments were revealed, forcing him to sell his franchise. Last year’s ESPN report detailed the accusations against Sarver using accounts from former employees, including Sarver explaining to staff that the Suns should have a Black head coach because “These [N-words] need a [N-word],” referring to the league’s majority-Black player population. Sarver stepped down as the executive chairman of Western Alliance Bancorporation in April amid the investigation.

We estimate the Suns to be worth $1.8 billion, making it the 18th most valuable franchise in the NBA. Sarver bought the franchise in 2004 for $401 million.

Former Disney CEO Robert Iger was mulling a bid for the Suns if the team went up for sale, according to Puck.

An investigation went through 320 interviews and more than 80,000 emails… and through all of this, five instances of using the dreaded “n-word” were found, thus the immediate defenestration of Sarver was mandatory.

This spoils system, in which white people are made to fear being called a racist or accused of racism, at the cost of the immediate forfeiture of everything they have attained or accomplished in life, cannot endure much longer.