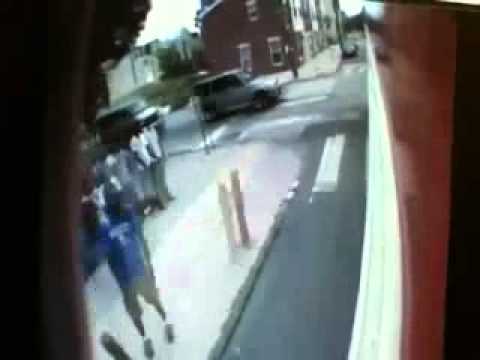 Here's edited video from the many new security cameras recently installed on a bus in North Philadelphia. It's a little slow to get started, but then gets quite entertaining.
The back story before the video starts is that the mother shown getting off the bus had spanked her child, which led to a verbal protest from the fellow with a shaved head and a beard in a reddish brown t-shirt. The mother then got on her cell phone and called for some backup to meet her at the bus stop to help her, as Dave Chapelle would say, in keeping it real.

Apparently, nobody was badly injured, although the chivalrous six fired a total of 13 shots in the general direction of the man in the reddish brown shirt.

The psychology is interesting. Evidently, the insulted mother called the brother of the father of her baby, who then recruited a bunch of relatives and friends to help him defend the honor of his brother's baby mama's childrearing techniques. Students of altruistic and nepotistic urges might want to diagram out the most distant linkage between the insulted woman and the least connected man involved. I don't know what they are exactly, but they might be something like "My half-cousin's uncle's brother's baby mama got dissed, so do you wanna help us kill the guy?" Sounds like a plan!

Those are some family values.

The other angle is the advance of technology versus crime. This bus was recently upgraded with an amazing number of security cameras. So, it's probably not a good idea anymore to stage a semi-automatic rifle assault on a bus in broad daylight in North Philadelphia. On the other hand, maybe the lesson is that you should put on hoodies and bandanas before attempting to hit the broad side of a bus with an assault rifle. Not all technological advances require criminals to undertake high-tech countermeasures.

In related crime and information technology news, The Guardian reports:

Police investigating those responsible for the London riots will be able to track down and arrest them based on their BlackBerry Messenger communication with others who took part.