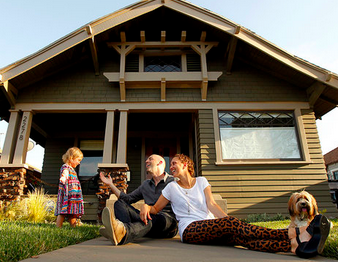 For years, I've been predicting that the most massive gentrification opportunity of the 21st Century would-be South-Central Los Angeles, or as it's been officially called since the regrettable events of April 1992, South Los Angeles. This is a gigantic area of flat land, superb sea-tempered climate, excellent freeway connections to jobs and airports, and (relatively) cheap land. The main problem is the current residents. But hipster whites have a plan to do something about that. From the LA Times:

Mark and Jillian Dillon and their 1-year-old daughter, Staley Rae, and dog Guv'nor hang out in front of their home in Jefferson Park. The Dillons, who had been renting in Venice, purchased the rehabbed Craftsman home a year ago.

Priced out of much of Los Angeles, young professionals are zeroing on several neighborhoods around USC and to the west, as the expanding Expo light rail line delivers new residents to the area.

Communities such as Jefferson Park, Leimert Park and West Adams are attracting buyers — and investors — seeking their relative affordability, location between the Westside and downtown Los Angeles, and the rail link between the two.

The influx comes as the once-struggling communities now see potential for new investment along major boulevards of South Los Angeles such as West Adams, Jefferson and Crenshaw. Prices are shooting up: In the ZIP Codes covering these neighborhoods, the median home price jumped 40.6%, to $450,000, in the first quarter compared with a year earlier, according to San Diego research firm DataQuick.

Real estate professionals are taking notice. Agent Dino Buiatti is opening a West Adams office in June and plans to staff it with 30 agents. "In the next five, 10, 15 years, the whole neighborhood is going to change," he said. "There is a lot of money being poured in." ...

The flipping rate surpassed even investor and hipster haven Highland Park.
"There is an awful lot of activity," said Timothy Braseth, who last year rehabbed 15 homes in the area. "It's gotten very competitive."

Developers are scooping up older Craftsman and Spanish-style homes, fixing them up and selling to new arrivals from the Westside, downtown and West Hollywood.

Jillian Dillon bought a Jefferson Park remodel from Braseth last year. The fashion stylist and her music-industry husband came from Venice, where they rented. The couple scooped up a 1908 Craftsman bungalow for $442,000. It's a mile from an Expo light rail stop, which Dillon predicts will boost their property value in years to come.

"Our home in Venice would easily be a $1.5-million home," the 33-year-old mother said, recalling bidding wars they endured before realizing the Westside was out of reach.

Racial covenants kept the area predominantly white for decades. But in 1948, the U.S. Supreme Court ruled those racial deed restrictions unenforceable. Middle- and upper-class African Americans moved in, while many white residents left.

In the 1970s, jobs moved elsewhere and crime increased. The relatively new 10 Freeway now segregated South L.A. from the rest of the city, even splitting West Adams in two.

Uh, you know, freeways don't actually "segregate" places from other places, they connect them. For example, Sherman Oaks in the Valley, where Fast Times at Ridgmont High and Valley Girl were filmed, is split in four by the interchange of the Ventura (101) and San Diego (405) freeways. You see this all the time in article claiming that lead in gasoline caused crime: how could they not riot because they had a freeway nearby? Maybe having the traditionally most jammed freeway interchange in the country in Sherman Oaks caused Valley Girl accents, but crime?

After a more recent wave of Latino immigration, only Leimert Park remains majority African American. Many new arrivals are white.

I suspect social media makes it easier to gentrify since you can coordinate with other people on your wavelength about precisely which neighborhood you will all descend upon. A big problem with South-Central is that it's so big (51 square miles just in L.A. city — about as big as the entire city of San Francisco) that gentrifiers can't just drive around and spot each other, the way we could in Chicago where the potentially gentrifying neighborhoods were quite small in area. Gentrifiers need to link up with each other online and argue out where they are headed.

Another problem is that South-Central is flat and flat land tends to give wealthier white people in Los Angeles the creeps. They can picture the mob coming for them, waving torches. Flat land is more convenient to live on than the hills that ambitious Angelenos have clung to since the movie business got rolling.

A fear of apocalyptic mob violence directed at them has been endemic in elite Southern California circles at least since Nathanael West's 1939 novel The Day of the Locust about a moron from Iowa named Homer Simpson and other scary average joes who riot at the end. In that mental atmosphere, hills have always seemed more defensible.