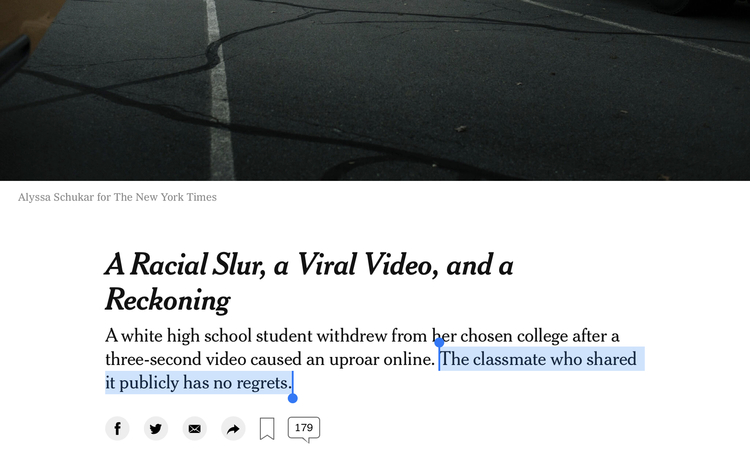 A Racial Slur, a Viral Video, and a Reckoning

A white high school student withdrew from her chosen college after a three-second video caused an uproar online. The classmate who shared it publicly has no regrets.

LEESBURG, Va. — Jimmy was in history class last school year when his phone buzzed with a message. Once he clicked on it, he found a three-second video of a white classmate looking into the camera and uttering an anti-Black racial slur.

That the white girl got from rap music.

The slur, he said, was regularly hurled in classrooms and hallways throughout his years in the Loudoun County school district. He had brought the issue up to teachers and administrators but, much to his anger and frustration, his complaints had gone nowhere.

So he held on to the video, which was sent to him by a friend, and made a decision that would ricochet across Leesburg, Va., a town named for an ancestor of the Confederate general Robert E. Lee and whose school system had fought an order to desegregate for more than a decade after the Supreme Court’s landmark ruling.

Which was about a half century before the white victim in this story was born.

“I wanted to get her where she would understand the severity of that word,” Jimmy, 18, whose mother is Black and father is white, said of the classmate who uttered the slur, Mimi. He tucked the video away, deciding to post it publicly when the time was right.

Mimi had originally sent the video, in which she looked into the camera and said, “I can drive,” followed by the slur, to a friend on Snapchat in 2016, when she was a freshman and had just gotten her learner’s permit.

White people should not listen to rap. You are just asking for grief.

It later circulated among some students at Heritage High School, which she and Jimmy attended, but did not cause much of a stir.

Jimmy had not seen the video before receiving it last school year, when he and Mimi were seniors. By then, she was a varsity cheer captain who dreamed of attending the University of Tennessee, Knoxville, whose cheer team was the reigning national champion. When she made the team in May, her parents celebrated with a cake and orange balloons, the university’s official color.

The next month, as protests were sweeping the nation after the police killing of George Floyd, Mimi in a public Instagram post, urged people to “protest, donate, sign a petition, rally, do something” in support of the Black Lives Matter movement.

“You have the audacity to post this, after saying the N-word,” responded someone whom Mimi said she did not know.

Her alarm at the stranger’s comment turned to panic as friends began calling, directing her to the source of a brewing social media furor. Jimmy, who had waited until Mimi had chosen a college, had publicly posted the video that afternoon. Within hours, it had been shared to Snapchat, TikTok and Twitter, where furious calls mounted for the University of Tennessee to revoke its admission offer.

By that June evening, about a week after Mr. Floyd’s killing, teenagers across the country had begun leveraging social media to call out their peers for racist behavior. Some students set up anonymous pages on Instagram devoted to holding classmates accountable, including in Loudoun County.

The consequences were swift. Over the next two days, Mimi was removed from the university’s cheer team. She then withdrew from the school under pressure from admissions officials, who told her they had received hundreds of emails and phone calls from outraged alumni, students and the public.

“They’re angry, and they want to see some action,” an admissions official told Mimi and her family, according to a recording of the emotional call reviewed by The New York Times.

Mimi was among many incoming freshmen across the country whose admissions offers were revoked by at least a dozen universities after videos emerged on social media of them using racist language.

In one sense, the public shaming of Mimi underscores the power of social media to hold people of all ages accountable, with consequences at times including harassment and both online and real-world “cancellation.” But the story behind the backlash also reveals a more complex portrait of behavior that for generations had gone unchecked in schools in one of the nation’s wealthiest counties, where Black students said they had long been subjected to ridicule. “Go pick cotton,” some said they were told in class by white students.

“It was just always very uncomfortable being Black in the classroom,” said Muna Barry, a Black student who graduated with Mimi and Jimmy. Once during Black History Month, she recalled, gym teachers at her elementary school organized an “Underground Railroad” game, where students were told to run through an obstacle course in the dark. They had to begin again if they made noise.

The use of the slur by a Heritage High School student was not shocking, many said. The surprise, instead, was that Mimi was being punished for behavior that had long been tolerated.

Leesburg, the county seat of Loudoun County, lies just across the Potomac River from Maryland, about an hour’s drive from Washington. It was the site of an early Civil War battle, and slave auctions were once held on the courthouse grounds, where a statue of a Confederate soldier stood for more than a century until it was removed in July.

The Loudoun County suburbs are among the wealthiest in the nation, and the schools consistently rank among the top in the state. Last fall, according to the Virginia Department of Education, the student body at Heritage High was about half white, 20 percent Hispanic, 14 percent Asian-American and 8 percent Black, with another 6 percent who are mixed race.

In interviews, current and former students of color described an environment rife with racial insensitivity, including casual uses of slurs. …

Mimi said the video began as a private Snapchat message to a friend. “At the time, I didn’t understand the severity of the word, or the history and context behind it because I was so young,” she said in a recent interview, adding that the slur was in “all the songs we listened to, and I’m not using that as an excuse.” …

Since the racial reckoning of the summer, many white teenagers, when posting dance videos to social media, no longer sing along with the slur in rap songs. Instead, they raise a finger to pursed lips. “Small things like that really do make a difference,” Jimmy said.