A young man has been charged with trying to kill Donald Trump. He's apparently a white guy from Britain, visa unknown, who's been thinking about killing Trump for a year.

A federal officer claims that Michael Steven Sandford told him that he wanted to kill Donald Trump at his Las Vegas rally on Saturday, June 18 at the Treasure Island Casino. The 19-year-old tried to get a Las Vegas Metropolitan Police Officer’s handgun so he could assassinate the Republican candidate.

According to The Associated Press, Sanford was charged with an act of violence on restricted grounds and includes information from a report by Special Agent Swierkowski.

Here’s what we know about Sanford so far. This is a breaking story and we will add more information as it comes in.

According to the AP, Swierkowski said Sanford told authorities he drove from California with intent to harm Trump. He arrived in Las Vegas on June 16 and went to the Battlefield Vegas gun range to learn how to use a gun the day before the rally. He said he fired a 9mm Glock.

Sandford also told authorities that he had been planning to kill Trump for a year “but decided to act on this occasion because he finally felt confident about trying it.” He said that he would try it again if he could. In fact, he reserved a ticket for Trump’s Phoenix rally later the same day.

The complaint says Sandford had a U.K. driver’s license. He only moved to the U.S. a year and a half ago and first lived in Hoboken, New Jersey before moving to the Ontario/San Bernardino, California area. He said he drove across the country. Michael Steven Sandford: 5 Fast Facts You Need To Know 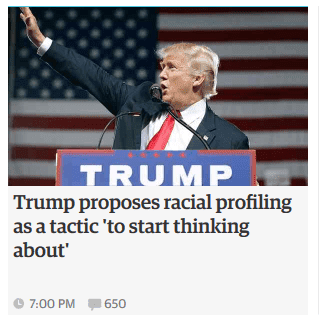 Heavy.com follows tradition in which the "5 Fast Facts" never include race or immigration status—they don't describe Sandford's race, even though he's white, and they don't call him an "immigrant", even though he's British. If you're looking for a "climate of hate" to blame, I'd say, since he's a young Briton, to have a look at the Guardian. (A typical Guardian effusion pictured at right.)

And if you want to cast your "climate of hate" nets a little wider, I'd suggest you look at the entire US mainstream media, including that part of it controlled by Conservatism, Inc.

Here are some more details about the arrest: the official complaint on Scribd.com.