When It Comes to White Homeless, Chinese Immigrants Slightly to the Right of Qin Shi Huangdi 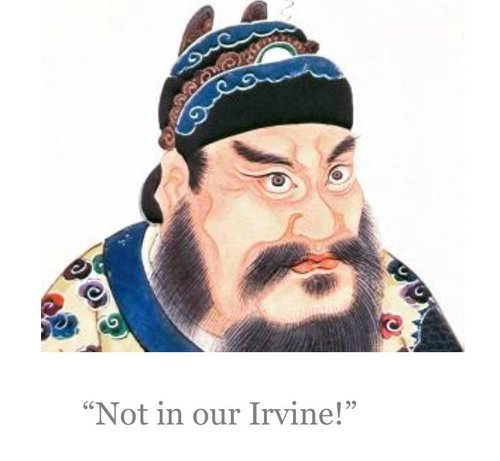 One of the booming industries in Southern California at the moment is providing drug addiction clinics in the sunshine for junkies from the Midwest. But when their insurance runs out and they still love drugs, do they go home to cold Ohio? Often they get a tent and join a homeless encampment.

Asian immigrants in one of Orange County’s most upscale towns, Irvine, are not terribly compassionate. From the L.A. Times:

In fighting homeless camp, Irvine’s Asians win, but at a cost

In fighting homeless camp, Irvine’s Asians win, but at a cost

One by one, the buses pulled up to the Orange County Hall of Administration last week carrying posters with messages such as “No Tent City” and “No Homeless in Irvine.”

Many of the hundreds on board were immigrants, and this would be their first experience joining a political protest.

A week earlier, county officials announced that they were considering placing emergency homeless shelters in Irvine as well as in Laguna Niguel and in Huntington Beach. All three cities immediately fought the plan, but the opposition was most fierce in Irvine.

Many of the loudest voices in the movement to block the shelter plan were Chinese Americans who came together through social media apps and various community groups. They were joined by immigrants from South Korea, India, Mexico and the Middle East, along with some whites.

They rallied to protect their community from what they see as the ills of homeless camps, which many argued don’t belong in their famously clean, safe, family-oriented planned community. Their protests helped persuade the Orange County Board of Supervisors to overturn the shelter proposal, leaving the county without a homeless plan at a time when the population is growing and officials are shutting down tent cities along the Santa Ana River.

It was a big political victory for the diverse opposition from Irvine. …

Most protesters arrived in 24 buses chartered from Southern California travel agencies, the culmination of eight days of organizing in Irvine by residents.

“Did you see how we created a presence to keep our neighborhoods safe? Look at those crowds! It was like Chinese New Year,” said Kelvin Hsieh, manager of a high-tech company who signed up to ride the bus and marched with his daughter, fifth-grader Ava.

Like Hsieh and others on the buses, Haiying Snider, a fashion designer, said she has “never engaged in political issues” but felt motivated to get involved in this fight because it felt so close to home.

Chunzhu Yu, a dentist with offices in Irvine and Orange, said he paid about $5,000 to sponsor seven buses, taking half a day off from seeing patients to air his views.

“We had to go to defense mode to keep trouble away,” Yu said.

WeIrvine, a Chinese internet services company with about 40,000 members, used its social media platform to spread the word about the plan to locate one of the emergency shelters in Irvine.

Irvine is an affluent, fast-growing and ethnically diverse city, so it’s no surprise that the protesters would be diverse as well. Asians make up 45.7% of Irvine’s 258,000 residents, according to the U.S. Census Bureau, while whites and Latinos make up 38.2% and 7%, respectively. Among its residents, 65% are college graduates. Irvine boasts a median home value of $740,000.

Where I live in the San Fernando Valley, there aren’t that many East Asians. Most of the recent immigrants are from the ex-Soviet and ex-Ottoman Empires, and their basic political outlook is slightly to the right of Ivan the Terrible and Suleiman the Magnificent.