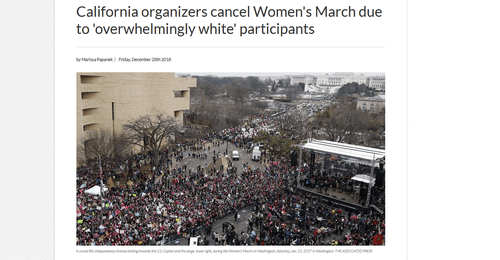 EUREKA, Calif. — The organizers of the annual Women’s March have decided not to hold a rally in Eureka on Jan. 19, as previously planned, because they say participants do not represent the diversity of the area.

“This decision was made after many conversations between local social-change organizers and supporters of the march,” organizers said in a press release. …

“Up to this point, the participants have been overwhelmingly white, lacking representation from several perspectives in our community,” the press release went on to say. …

Humboldt County on the far northern California coastline almost up to Oregon was 1.1% black in the 2010 Census. But, I gather, you can’t hold a Woman’s March on the Saturday of Martin Luther King Birthday weekend because that would be anti-Intersectional.