What Trump Should Do: “Arguably Wrong” Ballparks Three Different Strategies

Here, stayed up too late working on this. Let me know what you think and then I’ll post it to be shared. I had to split the figure into two because the three curves don’t fit on the same plot. 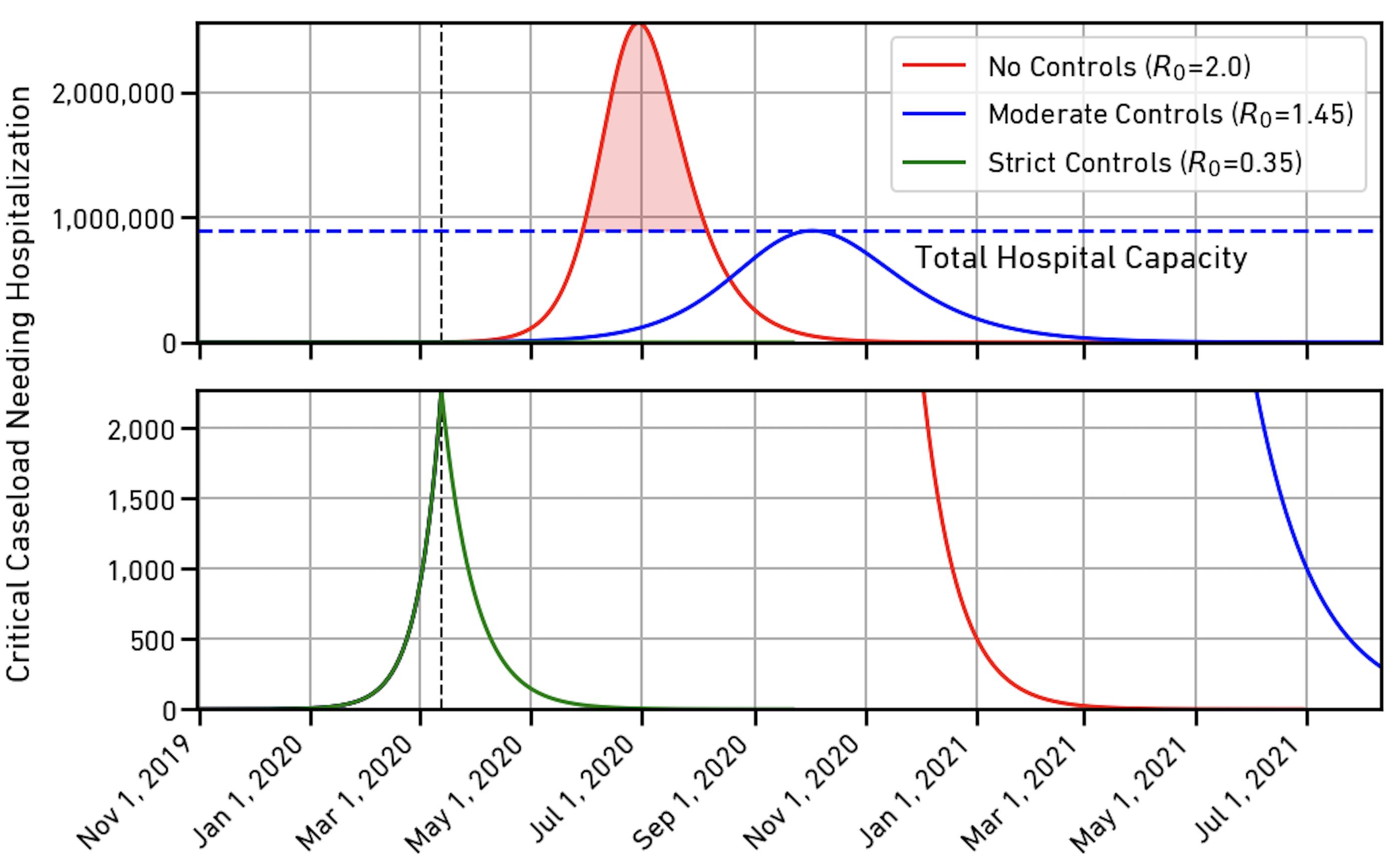 The first graph is the now famous #FlattenTheCurve graph. It’s better than nothing but not as good as #CrushTheCurveNow (the second graph).

In other words, a Wuhan-style lockdown would get the epidemic over by summer.

An Angela Merkel-style moderate response would imply that about one million Americans would incrementally die, the plurality of them Trump voters, with the peak death rate around Election Day. (Do you understand what this would mean?)

A let it rip response would run into mid 2021 with 2.5 million incremental deaths.

Hate to spoil the panic parade but what if everyone is wrong?

1) What if hospitalization and death rates have been greatly exaggerated by sampling bias?

Tests have been rationed in all countries since the outbreak. Until now, those being tested are the subset of the population sick enough to want to be tested or those with specific risks like fever and recent travel to China. We also know some percentage of cases are asymptomatic.

Most analysts indicate there are vastly more cases in the wild than reported by official testing. That is actually good news! It indicates the true hospitalization rate is much lower than the reported rate. If that is true, then the likelihood of the health system collapsing or millions of deaths is much lower than suspected.

Another suggestive point is the severity of the flu season. This has been driven by the flu vaccine being unusually ineffective this year. This is more speculative, but what if many “flu” cases were actually coronavirus? That would explain the vaccine not working as expected. It would also mean the US health system has absorbed many times the coronavirus cases as currently supposed without collapsing.

2) What if Italy and Iran are outliers?

The death rate in Italy is ~7% and Iran is unknown but presumably high. So far the death rates in the rest of Europe range from 0.1% in Germany and Switzerland to 0.2% in Spain as of this writing. There are reasons to think the worst case countries are outliers rather than inevitabilities.

Italy’s population is unusually elderly and the most affected state has close ties to China. Iran’s infrastructure has been hurt by decades of sanctions. Both countries have higher than average smoking rates.

3) What if straight line estimates of infection rates are wrong?

Any straight line estimate ignores Farr’s law, which indicates the end of an epidemic will generally be as swift as its onset. Additionally, epidemiologic evidence is suggestive that coronavirus will be much like other respiratory viruses in being suppressed by warmer weather. So far the southern hemisphere has seen very little spread. With warmer weather incoming there is likely to be relief in the northern hemisphere in the next month.

Lockdown measures are not without costs. Most of the world is highly indebted and recessions are associated with higher death rates from all causes. I have not seen any report from expert or armchair analyst alike that includes error bars in the analysis and I suspect we should be far more uncertain about outcomes here than we currently are.