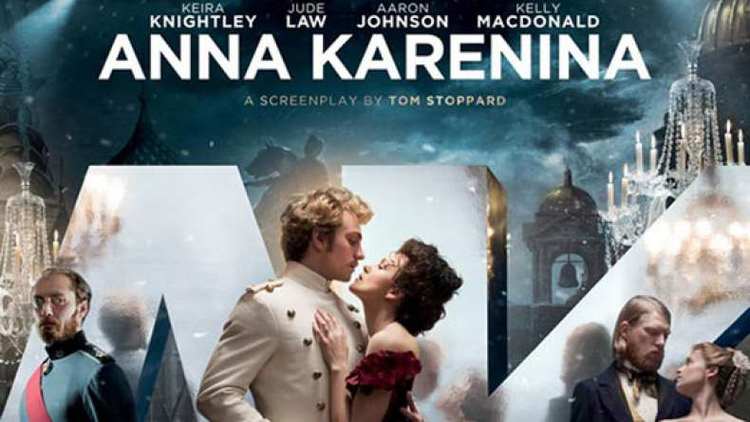 What Stoppard copied from Waugh for "Anna Karenina"

This isn't hugely important, but it's fun to note where major writers get their ideas. From my movie review in Taki's Magazine of Anna Karenina, which features an adaptation of Tolstoy's novel by playwright Tom Stoppard:

Stoppard is often attacked for his notorious cleverness, but he tries to use his brainpower to make audience comprehension as simple as possible (but not simpler).

Russian novels, however, are notorious for their endless characters with endless names. For example, Anna’s husband is Count Alexei Alexandrovich Karenin, while her lover is Count Alexei Kirillovich Vronsky. In his narration, Tolstoy gets around this self-inflicted problem by calling the father of Anna’s son “Alexei Alexandrovich” and the father of her daughter “Vronsky.” To help Western audiences, Stoppard mostly skips the middle names.

Besides cutting away until he ends up with an efficient rendition of the grand plot, Stoppard adds a brilliant new climax to the steeplechase scene that Tolstoy had overlooked, perhaps because it didn’t occur to him how confounding having two Alexeis might be to foreigners. In Stoppard’s variation, when Vronsky falls in a horse race for cavalry officers, Anna screams “Alexei!” Her husband comes running when she calls his name, only for her to ignore him in front of tout le Moscou in her anguish over her new Alexei.

Stoppard presumably lifted this device from the most shocking scene in Evelyn Waugh’s 1934 novel A Handful of Dust, in which the wife has a young son and a lover both named “John.” Informed only of the death of “John,” she exclaims “Oh, thank God” when she then
learns that it was merely her little boy who was killed in an equestrian accident.  (Here’s a recent interview with Stoppard to promote Anna Karenina where he cites A Handful of Dust as a “masterpiece.”)

In other words, Stoppard has been thinking about Waugh's plot device recently. That shouldn't be surprising: Back in the 1990s, Stoppard told a reviewer that his three favorite writers were Waugh, Vladimir Nabokov, and Thomas Babington Macaulay, so there's nothing new here. (By the way, I like Waugh, Nabokov, and Macaulay, too, so it's hardly surprising I like Stoppard.) Indeed, when I type "Stoppard Waugh" into Google, I find this:

From September 1962 until April 1963, [Stoppard] worked in London as a drama critic for Scene, a new arts magazine, writing reviews and interviews, both under his name and under the pseudonym William Boot which was taken from the protagonist in Evelyn Waugh's novel Scoop. Stoppard says he was drawn to this character because he was "a journalist who brought a kind of innocent incompetence and contempt to what he was doing.... I used it, and got quite fond of Boot as a name." He liked it so much in fact, that his early tv and radio plays frequently feature characters with the name Boot.

In turn, I wonder if Waugh's original scene in A Handful of Dust was a parody of the horseback accident scene in Anna Karenina? I can't find any evidence online that Waugh ever read Tolstoy—in general, Waugh hated 19th Century novels for their long-windedness, but he mostly excoriated Dickens in print—but I can imagine Waugh muttering his way through Anna Karenina, "Alexei Alexandrovich? Alexei Kirillovich? Why they can't this loquacious Muscovite use proper English names, like, say, John? Wait a minute, that gives me an idea ..."

A few years ago, I bought myself for Christmas War and Peace and a new copy of Scoop to replace the one that I had reread so often it fell apart. After 100+ pages of War and Peace, I said to myself, "You know, the plot is kind of like Scoop—rich people socialize in the city and the country, and then off to war—but Waugh only needs about 1/3 as many words as Tolstoy to communicate." So, I reread Scoop for a 10th time instead of War and Peace for the first time.

Waugh's non-verbose style was influenced by 1920s silent films. I believe he was employed as a screenwriter at a big studio for awhile, but only the amateur 28-minute silent comedy The Scarlet Woman: An Ecclesiastical Melodrama, made by Waugh's friends in 1925, ever made it to the screen.