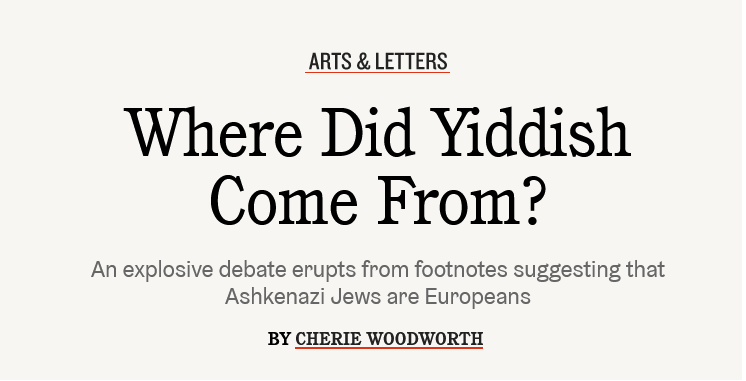 Weinreich: "The Jews Wanted to be by Themselves"

Cherie Woodworth writes in The Tablet about the 1969 classic The History of the Yiddish Language by Max Weinreich and his exposure of one of the dominant historical myths of our time:

Weinreich’s first innovation in the History was to argue, against apparent common sense and abundant personal experience, that Yiddish was formed not through isolation but through constant interaction combined with a chosen separateness. The walled-off ghettos of 18th-century European cities, although they preserved Yiddish, were not the environment that gave it life. Weinreich’s innovation was to argue that “Jewish otherness”—and the language that goes with it—“cannot be the result of ‘exclusion’; it is not even the result of exile.”

Where others had persistently told the story of confinement, prejudice, and persecution, Weinreich spoke of independence, self-government, self-assertion, and community building. It was undeniable that “without communal separateness there is no separate language,” and so the separateness of the Ashkenazi community was necessary for Yiddish to arise. But the modern explanation for that separateness, according to Weinreich, got the story exactly backward. Nineteenth-century Jewish activists, demanding rights of citizenship, created the story that the Jews had been locked in ghettos since the Middle Ages, “and thus excluded from society at large and its intellectual development; in this forced isolation”—an influential Jewish assimilationist argued—“both their mode of life in general and their language in particular became corrupted.”

Weinreich would not hear of corruption; instead, he sang the achievements of Yiddish. …

For Weinreich, based on both the linguistic and historical evidence, there could be no doubt that up until the 18th century “the Jews wanted to be by themselves. … Separate residence (strange as this may appear in the light of present Jewish and general conceptions of rights) was part of the privileges granted the Jews at their own request” so they could worship together; provide for their own slaughterhouse, bathhouse, cemetery, and social halls; study together; run their own rabbinic courts; supervise tax collection; and when necessary, protect themselves from attacks.

Archeology supports this part of Weinreich’s argument. Befuddled tour guides in Prague struggle to explain why, given the expectation of exclusion of Jews, the city’s famous Jewish quarter, Josefov, is so central to the old town. (One misguided explanation is that the Jews were given land near the river that was too marshy for the other city inhabitants, prone to flooding and disease-bearing miasmas.) But Prague’s Josefov is not an isolated case—it is typical. Weinreich’s point is that exclusion could also be exclusivity; restrictions also came with designated privileges. In Trier, Mainz, Aachen, Cologne, Worms, and more than 100 medieval towns in Central Europe, the Jewish district was both a central and a prime location, close to the economic heart of the city. The German Bishop Rüdiger, granting a charter of the city of Speyer in 1084 wrote, “I thought that I would increase the glory of our city a thousandfold if I were to include Jews.”

For the majority of generations over the last 800 or so years, Ashkenazi Jews tended to be richer and more advanced on average than their Christian neighbors. I’ve said in the past that the average Jew in European history was wealthier than the average gentile, but this new formulation is better. The problem with the old way I phrased it was that as the Jewish population exploded over the last 300 years, Jews got relatively poorer due to the usual workings of the law of supply and demand. And since there were a lot more Jews in 1900 than in 1500, the arithmetic gets more complicated. In contrast, treating each generation equally makes the comparison much simpler and clearer.

In the second half of the 18th Century, some Jews, such as Moses Mendelssohn (1729-1786) noticed that Jews were starting to fall behind in Enlightenment Europe and began the Jewish Enlightenment. Of course, just as the old rabbis probably warned him, that wound up taking many individuals, such as his grandson Felix, out of the Jewish faith.