We Should Do What Mexican Officials DO About Deporting Illegals, Ignoring What They SAY About It 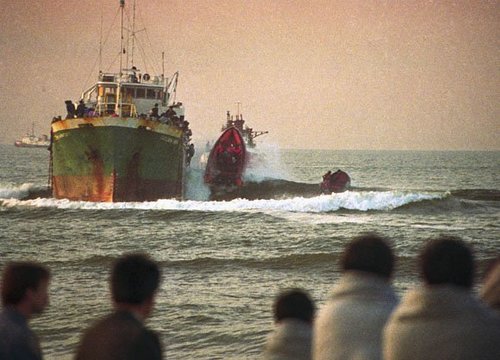 Even though I've been involved in immigration-sanity efforts for about 17 years — initially by attending monthly meetings of the late Barbara Coe's California Coalition for Immigration Reform — I can still be amazed by how much more there is to learn about the (appalling) history of American immigration.

That's my current experience in reading the third edition (2003) of Vernon M. Briggs's Mass Immigration and the National Interest.  (Briggs is Emeritus Professor of Labor Economics at Cornell University and a board member of the Center for Immigration Studies.)  It's a gracefully-written work of astonishingly thorough scholarship — now two-thirds of the way through its ~280 pages, I've already noted more than 100 of its passages for future reference.

The book has a memorable vignette that neatly contrasts the fecklessness of American immigration policy with the nation-serving policy of Mexico.  You first have to know about the 1993 adventure of the Golden Venture, a dilapidated freighter with a cramped cargo of about 300 aspiring illegal aliens from China, grasping for the American Dream.  As a brief article at The New Yorker's website (A Path out of Purgatory, by Patrick Radden Keefe,  June 6, 2013) recounted 20 years later:

The voyage was a Conradian nightmare, from Bangkok to Mombasa, Kenya, and then down around the Cape of Good Hope. In 1620, it took the Mayflower sixty days to reach these shores. In 1993, it took the Golden Venture a hundred and twenty.

When the ship plowed into a sandbar several hundred yards offshore [the New York City borough of Queens], passengers mobbed the deck, then began, one after another, to jump over the side and into the chilly Atlantic. They had been informed by the “snakeheads”—human smugglers—who controlled the ship that if they could set foot on land in the United States before being caught by the authorities they would be permitted to apply for political asylum. Ten of the passengers did not survive the swim to shore. 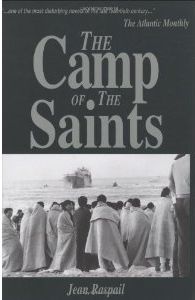 A picture (see above) of some of those passengers, huddled under towels and with their immobile ship in the background, is the cover illustration for the paperback edition of Jean Raspail's dystopia-by-immigration novel The Camp of the Saints.

On page 168 of his book, Briggs takes up the sequel:

Only one month after the Golden Venture ran aground, three other freighters, crammed with over 600 persons from China, were intercepted in international waters south of San Diego, California.  The freighters were prevented from entering U.S. territorial waters by U.S. Navy vessels.  The government of Mexico — after much coaxing from the U.S. government — agreed to allow the ships to be escorted to its territorial waters, where it then allowed the ships to dock.  Mexican officials immediately transported those aboard to the airport in nearby Ensenada, and they were then flown directly back to China.

In explaining the willingness to perform this task, an official of the Mexican government explained: "We know very well that none of these people who are coming here are being persecuted.  The U.S. knows that, too.  The only difference is that in the United States the only thing you have to do is step on American soil and cry asylum and you get a hearing."

Surely there is no more potent crew of hypocrites on the planet — perhaps in the universe — than the last two generations (at least) of Mexican officialdom, who routinely scourge the U.S. for any interference with their poverty legions settling, uninvited, in the U.S. while themselves running a regime of strict immigration enforcement.  For example, see Mexican president 'indignant' at U.S. deportations, by Julia Symmes Cobb (Reuters, February 27, 2014).

But hypocrites that they are, at least they know whom they're working for!