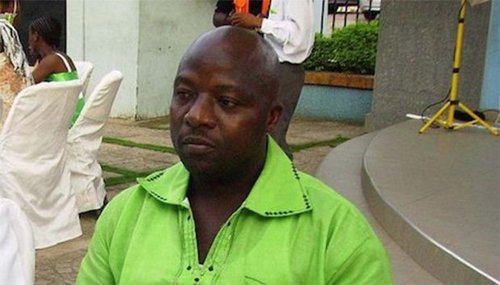 Back on October 18, our own Nicholas Stix wrote on the subject of "On Being Culturally and Biologically Enriched by West Africa's Ebola Zone" and observed,

[The] tendency to blame whitey for Ebola can also be found in the U.S. Thus the Dallas Morning News published an op-ed signed by Josephus Weeks, who claims to be the nephew of Thomas Eric Duncan, the man who knowingly brought the Ebola virus to America and ran up a $500,000 hospital bill in a mere 12 days before his October 8 death. Duncan also infected two hospital nurses and, since one of the nurses, Amber Joy Vinson, traveled immediately after caring for Duncan, possibly many others.

But Duncan’s family has bigger concerns, like positioning itself for a lawsuit. With no sense of shame, Josephus Weeks (or his plaintiff attorney) writes,

Now, Dallas suffers. Our country is concerned. [NS: He means the US, not Liberia] Greatly. About the lack of answers and transparency coming from a hospital whose ignorance, incompetence and indecency has yet to be explained. I write this on behalf of my family because we want to set the record straight about what happened and ensure that Thomas Eric did not die in vain…

The fact is, nine days passed between my uncle’s first ER visit and the day the hospital asked our consent to give him an experimental drug — but despite the hospital’s request they were never able to access these drugs for my uncle. [NS: Hospital officials have said they started giving Duncan the drug Brincidofovir on October 4.]He died alone. His only medication was a saline drip. [Exclusive: Ebola didn’t have to kill Thomas Eric Duncan, nephew says, October 14, 2014, updated 16 October 2014.]

Weeks also insinuates that the reason Duncan died was due to racism. He says the hospital saw Duncan “was a man of color with no health insurance and no means to pay for treatment, so within hours he was released with some antibiotics and Tylenol”…

However, the fact is Duncan eventually did receive hundreds of thousands of dollars of treatment despite having no insurance and being a foreigner. There is no cure for Ebola; different therapies have been tried, but the ones Weeks is complaining about were either temporarily exhausted (ZMapp) or improper (Duncan had the wrong blood type to get a plasma transfusion from Ebola survivor Dr. Kent Brantley). And it is unclear whether they work anyway. [Dallas Hospital Responds to Criticisms of Ebola Patient's Treatment by Anna Almendrala, Huffington Post, October 10, 2014.]

Weeks even manages to simultaneously claim that Duncan was “courageous” for helping an Ebola patient in Liberia but also that the incident “never happened.” This is critical because that woman is the supposed source of his infection.

However, other reports citing Duncan’s relatives claim that the incident did happen, and that Duncan mistook a woman dying of Ebola as having a miscarriage. [Before his death, Duncan said he mistook Ebola case in Liberia for miscarriage; never lied by Avi Selk, Dallas Morning News, October 8, 2014.]

The only constant in all these wild stories: Liberians in general and Duncan in particular are victims of the West—and someone has to pay.

The hospital that treated the only Ebola patient to die in the United States will pay his relatives an undisclosed sum and create a charitable foundation in his name, the family's attorney said Wednesday.

The agreement heads off a lawsuit from relatives of Thomas Eric Duncan, who died Oct. 8 at Texas Health Presbyterian Hospital Dallas.

Duncan, who arrived in North Texas from Liberia on Sept. 20, was initially sent away from the hospital's emergency room with antibiotics, something Presbyterian administrators have acknowledged was a mistake. He returned to the hospital in an ambulance two days after his release and was quickly diagnosed with possible signs of Ebola, which has killed more than 5,000 people in West Africa.

Attorney Les Weisbrod declined to say at a news conference how much money the family would receive but said the settlement was a "very good deal" that would provide for Duncan's parents and his four children. Weisbrod also said Presbyterian hospital was not charging Duncan's family for his medical treatment. The foundation will assist efforts to fight Ebola in Liberia, he said.

Once again — any American involvement in the Third World results in costs being imposed on Americans even as Americans are denounced for being privileged, racist, and not doing enough.

To review—an Ebola patient knowingly entered the country and demanded treatment at a hospital despite not being American and not having insurance.  He received a half million dollars worth of treatment before he died.  His family than sued, charging that the hospital didn't care if he died because of racism.  They quickly settled, waived the cost of treatment, provided enough money to "provide" for his parents and children and will transfer medical resources away from this country into Liberia.

Why?  Because of white privilege.