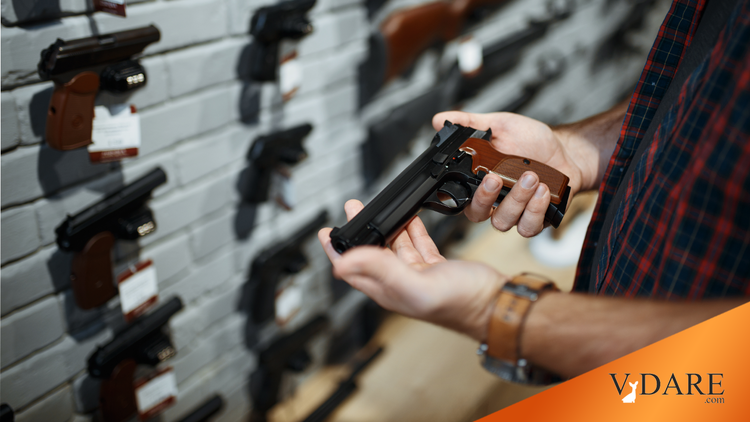 WASHINGTON POST: Gun-Buying Binge Is "Associated With" (In Fact, CAUSED BY) A Significant Increase In Gun Violence

Americans purchased millions more guns than usual this spring, spurred in large part by racial animosity stoked by widespread protests over the killing of George Floyd in Minneapolis, as well as anxiety over the effects of the covid-19 pandemic.

That gun-buying binge is associated with a significant increase in gun violence across the United States.

The word “associated” is doing a lot of work in that sentence.

Those are the conclusions of two studies by the Brookings Institution and the University of California at Davis, respectively. Together, they paint a portrait of a society arming itself against social upheaval during a time of institutional failure.

The Brookings study, after examining federal background check data, estimated an additional 3 million firearms were sold from March through June, compared with the same period in previous years. That’s roughly equivalent to the spike in gun purchases observed following the 2012 Sandy Hook school shooting and more than 50 percent higher than would have been expected for June sales.

Nearly half of those 3 million additional sales happened in June, after several days of protests sparked by Floyd’s killing in police custody. Researchers Phillip Levine and Robin McKnight of Wellesley College wrote that the spike differed from previous gun-buying binges because it was not driven by fear of pending restrictions but rather by anxiety and unease over the ongoing crises.

The research suggests that at least some of the spike in gun purchases is driven by racist beliefs and attitudes among white Americans.

One obvious check would be how many of the recent mass shooters identified by the police used guns recently purchased legally. My guess: not many. After all, only 9% of 2020 mass shooters have been white, while 75% have been blacks mourning the death of George Floyd.

“Best gun for women” clearly a search that led to more violence as well:

The 105% increase in the number of mass shootings from June 2019 to June 2020 is no doubt the fault of America’s Arch-Enemies, Karens and Beckys.