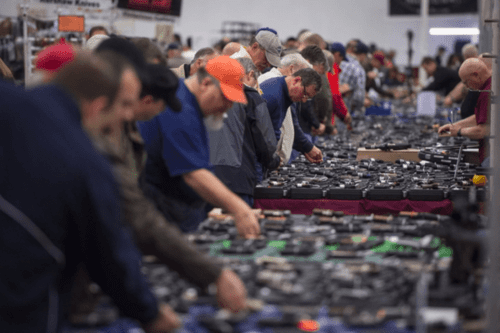 Most everyone understands Peter Brimelow was right when he argued that massive demographic change resulting from immigration would lead to massive political change. However, there are special rules about who is allowed to actually say this.

For example, if I say mass Third World immigration will mean the end of certain basic liberties generations of Americans took for granted, I'm a bad person and should be fired, censored, and physically attacked. On the other hand, if you think the replacement of Americans is a good thing because it increases the size of government, then you are rewarded and given access to the mass media Megaphone to scream at the masses what they are supposed to think.

Thus, Adam Winkler smirks in the Washington Post that mass immigration will allow the government to finally take away guns from those gross rural white Americans who, you know, created the country.

Support for, and opposition to, gun control is closely associated with several demographic characteristics, including race, level of education and whether one lives in a city. Nearly all are trending forcefully against the NRA.

The core of the NRA’s support comes from white, rural and relatively less educated voters. This demographic is currently influential in politics but clearly on the wane. While the decline of white, rural, less educated Americans is generally well known, less often recognized is what this means for gun legislation.

Polls show that whites tend to favor gun rights over gun control by a significant margin (57 percent to 40 percent). Yet whites, who comprise 63 percent of the population today, won’t be in the majority for long. Racial minorities are soon to be a majority, and they are the nation’s strongest supporters of strict gun laws.

An overwhelming majority of African Americans say that gun control is more important than gun rights (72 percent to 24 percent). While the African American population shows signs of slow growth, other racial minority groups are growing more rapidly — and report even greater support for gun control.

Of course, there's nothing "inevitable" about demographic change. The transformation of America into a Third World country is simply the predictable (and intended) result of deliberate policies by the federal government. It could be reversed tomorrow if the political will existed.

However, what is inevitable is the extinction of American conservative ideals about gun rights (and limited government more broadly) if this process continues. The Beltway Right, trying to squeeze out a few more returns from direct mail fundraisers before the end comes, either won't talk about this process or will take refuge in Protective Stupidity and pretend this will all somehow work out.

Katie McHugh over at Breitbart notices at least some conservatives see the writing on the wall even if the party bosses don't.

To date, no GOP candidate has explicitly connected mass immigration to restricted gun rights. The Republican National Committee says that opening up the border so Big Business can loot the working and middle classes is worth losing the imported, big-government-loving Hispanic vote by 73 percent. But an architect of the modern conservative movement, Phyllis Schlafly, warned in 2013 that while many whites grew up in relatively safe rural areas learning how to handle guns, immigrants come from chaotic countries where violence is the norm and authoritarian governments clamp down on ownership. [Washington Post Op-Ed Cheers: Mass Immigration Will Destroy NRA, Second Amendment, October 20, 2015]

And of course, there's a way out for the GOP.

Trump’s defense of the Second Amendment — along with the extraordinary proposal of nationwide reciprocity for concealed carry — would likely attract more white voters. A few more percentage points with whites would easily overcome minority votes against any GOP candidate, as conservative author Ann Coulter has repeatedly explained. Had Mitt Romney only won four more percent of the white vote in 2012, Barack Obama would have been a one-term president. And as Schlafly explained, appealing to all gun owners, period, will bring more voters to the Republican party.

But that would require the GOP to act like it actually wanted to win. And in the eyes of many people in Conservatism Inc. the Republicans job is to lose politely and keep paying those consultants' fees.