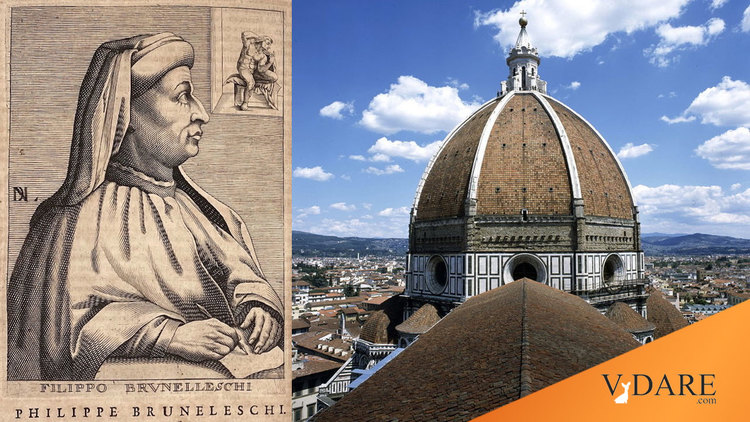 Was The Renaissance An Ethnic Propaganda Ploy?

A lot of opinions about Europe in the Middle Ages were based on regional rivalries. Italy was well ahead of Northern Europe until the second millennium A.D. But then the Northerners developed impressively — e.g., Gothic cathedrals, a pointy style innate to the North.

By 1386, even in Milan they began building their new cathedral in the pointy Gothic style, although the Italians have never been too happy about their ancestors having submitted to the Northern style.

The Florentines decided in 1294 to build a new Cathedral with a dome, said to be the first in Western Europe in roughly 1000 years. The Romans were the masters of domes, as in the 2nd century Pantheon. But how to build domes had been forgotten in the West. The Florentines intended to build a dome, but they didn’t yet know how to do it. In 1418 Brunelleschi was selected to finally build the dome, which he completed in 1436. He probably also invented perspective drawing, or reinvented it (the Romans might have had it), which would have been a big help in getting his dome built.

Brunelleschi appears to be the key man in launching the Renaissance.

But keep in mind that the idea of the Renaissance was a sort of Italian conspiracy against the rapidly rising culture of the North. Italian Renaissance partisans lambasted the era of rising Northern dominance of European culture as the Dark Ages, when the wisdom of Rome had been forgotten.

In turn, the Southern Renaissance led to the Northern reaction of the Reformation over the immense expense of that ultimate project of the Italian Renaissance, St. Peter’s.

My view is that all these guys were, in my view, pretty awesome.

We know who Brunelleschi was because the Florentines had a sort of Teenage Mutant Ninja Turtle cult of artistic celebrityhood—Donatello! Leonardo! Michelangelo!—that has made history much more interesting.

Presumably, the first architects of Gothic cathedrals were geniuses of the same order, although we have only a vague idea of who they were. We know the first fully Gothic church, St. Denis near Paris, was sponsored by Abbot Suger in the 1130s, but history is vague on whether Suger was the designer or patron, probably the latter. For instance, with Notre Dame cathedral, we don’t know who the first three or four chief architects were, and then have the names (but not much else), of the next chief architects.

A huge influence on our view of European cultural history was Vasari’s 1550 book Lives of the Most Excellent Painters, Sculptors, and Architects. Vasari was a Florentine, so Florentine artists reign supreme in his first edition.

Interestingly, Venice was the center of Italian book printing and had a spectacular artistic heritage. But no Venetian wrote a great book about Venetian painters, so, sorry, Venice.

Perhaps it had to do with Venice going great guns before the Renaissance, so they weren’t as impressed with their own progress during the 15th century.. When Mark Twain visited Europe in 1867, as recounted in Innocents Abroad, his guide in Venice was a snobbish but extremely cultivated black man from South Carolina who dismissed any enthusiasm of Twain’s by saying:

“It is nothing—it is of the Renaissance.”

The current version of St. Mark’s Cathedral in Venice was begun in 1063. Its old wooden domes were rebuilt in brick. They are much smaller than the dome of the Florence Cathedral, but still… Is Venice in Western Europe?

Instead, a Florentine wrote the most fun book about painters and sculptors, so a Florence-centric interpretation of art history has reigned supreme for the last 470 years. Foucault emphasized how history is socially constructed, which has a lot of truth to it. But, being a gay sadomasochist, he overemphasized power.