War on Halloween: Schools In Canada (and Beyond) Crack Down On "Offensive" Costumes

The political correctness brigade has now focused its sights on Halloween, just in case some diverse kid doesn’t feel included (even though no actual complaints have been found). And what student would object to replacing the daily grind of study with some candy and goofing off? As SunTV guy David Menzies notes, one school has prohibited the munchkins from dressing up and has renamed the occasion Black and Orange Day. The Toronto School Board has issued an advisory warning about all the bad things associated with Halloween.

We have become accustomed to the suppression of Christian holidays like Christmas and Easter so sensitive Muslim headchoppers won’t feel put out, but Halloween? The pagan backstory of the celebration would seem to make it a winner to the liberal esthetic. Aren’t wiccans a protected class in leftist ideology, as evidenced by the US military being forced to accept wicca practices?

Below, even former Secretary of State Hillary Clinton has embraced Halloween wicca diversity. 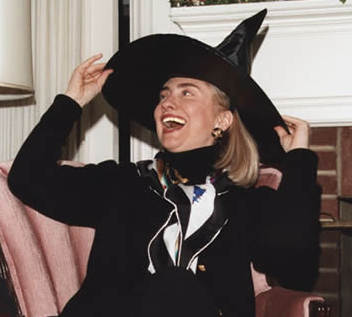 Meanwhile, in American colleges, the PC prohibitions are expanding. Indian and Arab outfits are not acceptable at campus parties, and definitely no sombreros!

As a memo to students from the University of Minnesota – Twin Cities noted:

“In particular, please keep in mind that certain Halloween costumes inappropriately perpetuate racial, cultural, and gender stereotypes,” it continues. “Although it may not be the intent, these costumes, and choosing to wear them, can depict identities in ways that are offensive or hurtful to others”