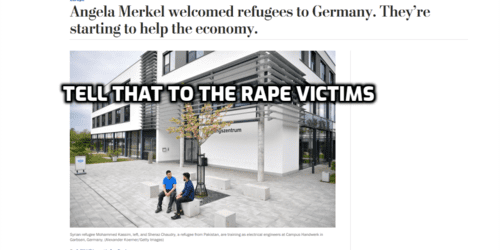 WaPo: See, Merkel Was Right After All (Kind of, Sort of)!

By Griff Witte and Luisa Beck May 5

GARBSEN, Germany — In his native Syria, Mohammed Kassim worked as an electrician. But having learned the trade informally, he lacked the credentials to show for it.

Now, in his adopted homeland, 30-year-old Kassim is receiving the training he never had.

What, you mean Syrian electricians aren’t up to German standards of not burning down the house? Isn’t that … racist?

And he is getting paid to do it by a company dangling the promise of a job that could vault him from struggling refugee to member of the German middle class.

The program that is helping tens of thousands of refugees rebuild their lives was not created for the newcomers who have converged on Germany to escape war, oppression and poverty.

Instead, Germany’s apprenticeship system is a fixture of the economy with roots in medieval times. But with the national unemployment rate at a 30-year-low, young Germans have lost their appetite for vocational training. Companies face a shortage of skilled workers that could ultimately derail their growth.

Whether it can find them among the refugee population could determine the answer to two of the country’s most daunting questions: Can Germany integrate its vast numbers of asylum seekers? And can its economy continue to hum as the native-born population ages?

On both counts, early indications have been promising, if inconclusive.

Nearly four years after German Chancellor Angela Merkel chose to leave the country’s borders open amid a vast influx of asylum seekers to Europe, a significant majority of the approximately 1.5 million people who have arrived since remain out of the labor force. …

Because nobody else in the world would want to move to Germany.

… Getting the newcomers into the workforce has not been easy. The vast majority arrived without knowing German — a notoriously difficult language — and without the job skills that German companies seek.

Of those who do work, many have taken low-paid jobs at restaurants, in warehouses or in the gig economy, performing on-demand deliveries.

Hey, it worked for Rotherham.

Sigmar Walbrecht, who directs workforce integration projects at the Hanover Refugee Council, tries to convince refugees he meets that they would be better off training for a higher-skilled job, even if it pays less right now. But the allure of a quick paycheck is strong. ….

Ramadan, who serves as a volunteer firefighter in Hanover when he’s not brushing up on one of his five languages or teaching himself math or physics online, acknowledges that he’s unusual among refugees.