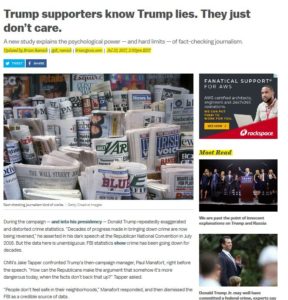 From Vox, an article about factchecking that starts with an un-factchecked falsehood:

A new study explains the psychological power — and hard limits — of fact-checking journalism.

During the campaign — and into his presidency — Donald Trump repeatedly exaggerated and distorted crime statistics. “Decades of progress made in bringing down crime are now being reversed,” he asserted in his dark speech at the Republican National Convention in July 2016. But the data here is unambiguous: FBI statistics show crime has been going down for decades.

Uh, the liberal Brennan Center estimated back in April 2017 that the homicide rate (the most reliable crime rate) was nationally 19% higher in 2016 than in 2014 and up 29% in the 30 biggest cities.

The homicide surge has been concentrated in cities where Black Lives Matter and its allies, such as the Democratic Administration, have been most influential, such as St. Louis, Baltimore, and Chicago. It appears to have begun with Ferguson in August 2014. So you can’t exactly debunk Trump’s statement of “Decades of progress made in bringing down crime are now being reversed” by pointing out that crime was going down for decades before the Democrats’ promoted Ferguson, MO into the Most Important City in World.