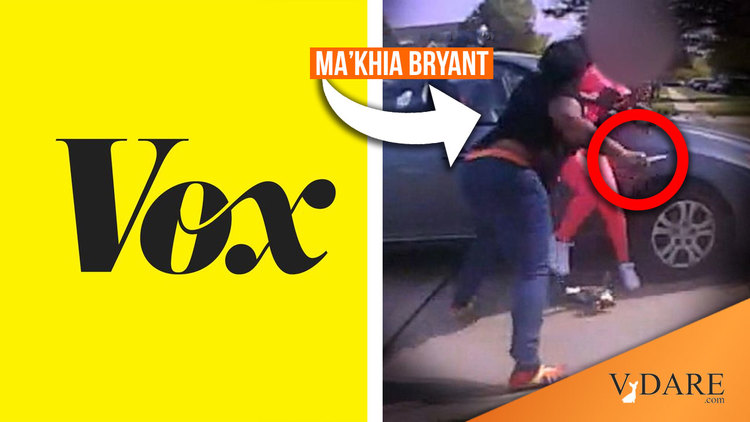 Vox At Its Voxiest: "Why They’re Not Saying Ma’khia Bryant’s Name"

Why they’re not saying Ma’Khia Bryant’s name
The 16-year-old Black girl could never be the “perfect victim.”

After watching 15 seconds of police body camera footage last week, viewers of various races and political affiliations had made a decision: 16-year-old Ma’Khia Bryant was “the aggressor” — the “fat,” “huge,” “knife-wielding attacker” and “maniac” who deserved to be fatally shot by the police on April 20 in Columbus, Ohio.

According to these viewers, Nicholas Reardon, the police officer who immediately shot and killed Bryant, who was holding a knife, was justified. That she was a teenager in the middle of an altercation, in which she was presumed to be defending herself, did not matter.

After all, the girl in pink was armed with a purse puppy. If that doesn’t demand a stabbing, I don’t know what does.

…But the cries for justice that applied to George Floyd did not ring out as loudly for Bryant. Even after it was discovered that Bryant was living in foster care, that she was in the middle of a fight with older women when police arrived, and that she was allegedly the one who summoned the police for help, people — some of the same people who called for justice in Floyd’s case — used police talking points to justify the four bullets that Reardon unloaded into Bryant’s chest. She was brandishing a knife, many pointed out, which meant the other Black women needed to be protected.

Crisis response experts noted, however, that deescalation tactics — like commanding Bryant to drop the weapon, physically getting between the women, or simply communicating with her — could have kept everyone alive.

And what about telekinesis? Did Officer Reardon even try to use brainwaves to disarm Ma’K the Knife?

In many recorded encounters between the police and white people carrying weapons, for instance, officers didn’t shoot first or even reach for their guns — they successfully managed to peacefully apprehend the suspect.

Bryant’s death has become a debate that questions a child’s actions — and worthiness to live — instead of another example of the racism of policing and the institution’s failure to provide wholesome support, care, and safety for the communities it serves. The insistence that Reardon had no other option than to take Bryant’s life to save others — though he risked everyone’s life in the process — displays the lack of consideration and value that society places on the lives of Black girls and women.

Treva Lindsey, a professor of African American women’s history at Ohio State University, told Vox that there are those who won’t see Bryant as a victim but as someone who brought this on herself. And even for those who do see her as a victim, they’ll still victim-blame, erasing the systemic oppression — including that Black children are far more likely to be in foster care than their white counterparts, and kids in foster care are often exposed to high levels of violence — that brought her to being killed at the hands of the police.

“People will say ‘I’m really sad this whole scenario happened, but had she not had that knife …’ That becomes the ‘but,’ the qualifier, the caveat. And too often we have a caveat when it comes to defending, protecting, and caring for Black girls,” Lindsey said.

And so forth and so on at great length.