The Washington Post has a curiously honest look at a school in Fairfax County, Virginia, where kindergartens are very diverse indeed. Immigration has imported poor, non-English-speaking children into a formerly white middle class area with predictable results. The foreign kids need the usual expensive special treatment, from ESL to remedial instruction and free food.

Below, extreme diversity is highlighted by a six-year-old burqa girl in the kindergarten of Lynbrook Elementary School in Springfield, Virginia. We know that the class is located in America from the flag. 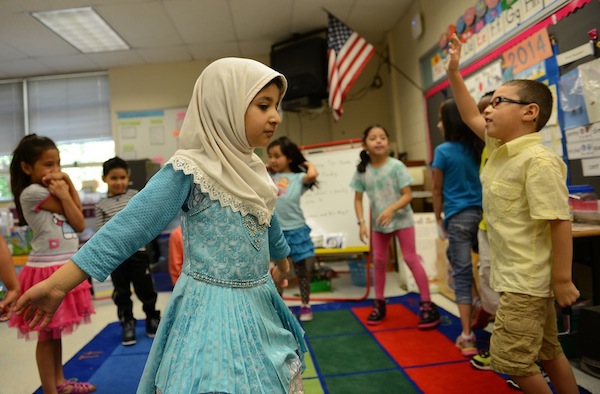 In addition, the word “cost” occurs five times but only one dollar amount is noted: $18 million in increased costs for teaching English over five years. What’s the tab for supply closets turned into free food banks or 990 trailers to hold the excess students?

And what kind of education do the remaining American students get in such an environment?

No American ever voted to overpopulate the country with the world’s welfare seekers who care nothing about this nation’s history and beliefs, but that’s what has happened because of a diversity-mad immigration system with no Off switch. Remember that the Senate immigration bill the elites want as law would double legal immigration.

Despite the obvious failure, the diversity-programmed superintendent recited, “We view these demographic shifts and our growing diversity as a strength that we will continue to celebrate.”

The kindergartners of the Class of 2026, who finished their first year in Fairfax County schools Wednesday, constitute the largest and one of the most ethnically, culturally and socioeconomically diverse groups of students the county has seen, a fact that school system administrators say could pose significant challenges in the decade to come.

Long an enclave of predominantly white, middle-class families with a top-class school system, Fairfax has experienced a dramatic demographic shift in recent years that is nowhere more obvious than in the county’s kindergarten classrooms. The white student population is receding and is being replaced with fast-growing numbers of poor students and children of immigrants for whom English is a second language.

More than one-third of the 13,424 kindergartners in the county this year qualified for free or reduced-price meals, a federal measure of poverty, and close to 40 percent of the Class of 2026 requires additional English instruction, among the most ever for a Fairfax kindergarten class.

The demographic changes in Fairfax are likely to have long-term implications for the school system: Most of this year’s kindergarten class will spend the next 12 years in county schools. Schools officials believe that the challenges that come with a less-affluent and less-prepared population will exacerbate the system’s struggles with a widening achievement gap for minorities and ballooning class sizes.

The rising enrollment — the overall student body has surged by more than 22,000 since 2004 — is not sustainable at the current funding level, schools officials said, which could intensify already contentious battles for tax dollars with the county’s Board of Supervisors. School Board member Ted Velkoff (At Large), chairman of its Budget Committee, said the increasing number of immigrant families in Fairfax has affected — and will continue to affect — the school system’s bottom line.

“We are required to educate their children, and we want to. But there is a cost,” Velkoff said. “There is a cost to having these children in the system. .?.?. And I think the thing that is troubling is that the Fairfax County taxpayer has to take a disproportionate part of this bill.”

During the past five years, costs for English language instruction increased by more than $18 million, and elementary school teachers say they spend an increasing amount of their time on remedial education.

School Superintendent Karen Garza, who fought for budget increases this year and got less than she believes the schools need to maintain their excellence, said she expects these trends to continue.

“There are additional costs associated with these changes that will continue to challenge our budgeting in the years ahead,” Garza said. “We view these demographic shifts and our growing diversity as a strength that we will continue to celebrate.”

Like Fairfax, school systems across the region have experienced rapid increases in the number of Hispanic students as well as the number of pupils who qualify for subsidized meals. In Montgomery County, more than 35 percent of students receive free or reduced-priced meals, compared with 22 percent in 2000. Poor students now account for 68 percent of the kindergarten class in Prince George’s County, and 3 in 10 kindergartners this year received additional English instruction.

The shifts are clearly evident in Fairfax’s elementary schools, where more students are arriving less prepared for kindergarten, putting them at an immediate disadvantage.

At London Towne Elementary in Centreville, teachers see a distinct difference between low-income students and their peers from middle-class families: their vocabularies.

Grace Choi, a kindergarten language teacher at London Towne, said children from poor families often arrive for the first day of school not knowing the alphabet, a standard lesson in preschool. Many cannot differentiate animal words such as cat, lion and cheetah or food words such as potato, eggs and tomato.

“The things you think are a given, they don’t know,” Choi said, noting that simple tasks such as zipping a coat can be puzzling to students who have never worn one.

At Springfield’s Lynbrook Elementary, 502 out of the 637 students speak Spanish at home, school records show, and 89 percent of those Spanish-speaking children were born in the United States.

In the school’s front office, the administrative staff primarily speaks Spanish to the students and their families. Most parents are not literate in their own language, McNamee said. Meredith Hopkins, a third-year kindergarten teacher at Lynbrook, said she has never had a native English speaker in her classes.

Velkoff, the School Board member, attributes part of the rapid growth of Hispanic families in Fairfax to controversial policies in neighboring jurisdictions that he said were hostile to immigrants.

The 2010 documentary “9500 Liberty” highlighted the contentious debate surrounding immigration in Northern Virginia. The film focused on a law enacted in 2008 in Prince William County that allowed police to question a person’s immigration status during routine traffic stops. The strict aspects of the law were rolled back after the county’s chief of police came out against the policy.

School officials said there is evidence that some immigrant families moved to Fairfax after Prince William’s law took effect; the Fairfax school system experienced an increase of 14,000 Hispanic students between 2008 and 2014.

“People were driven out of Prince William by the intolerance shown in that film,” Velkoff said. “In Fairfax, our feeling is we welcome everybody here with open arms. I’m happy to be a magnet for people who want to live in a tolerant society.”

Louise Epstein, a longtime Fairfax education activist, said some parents have watched with concern as the county has shifted resources away from affluent neighborhoods to schools with rising populations of poor and immigrant students.

As a result, class sizes have grown in certain areas of the county, frustrating parents, Epstein said.

Such families “are getting fed up and sending their children to private schools,” she said.

According to county budget documents, the surging enrollment is attributed to higher birthrates among Asian and Hispanic families, who account for one of every four births in Fairfax. The percentage of white students in the schools is steadily declining. In 2002, more than half of the student population was white; today, white students account for 41.4 percent of enrollment.

Kevin Sneed, director of construction and planning for the school system, said the rise in enrollment in recent years has created capacity issues, leading the schools to use more than 990 trailers for extra classroom space. At many schools, supply closets have been transformed into miniature food banks for children who come to school hungry and return home at the end of the day to homes with bare cupboards.

At Mason Crest Elementary in Annandale, more than half of the 580 students live in poverty, said Assistant Principal Diane Kerr.

“What people think about is a yuppie Fairfax family experience, where the kids go home and go to soccer practice,” Kerr said. “Our kids don’t have those opportunities. They go home to babysit siblings. Older siblings go to work.”

Understanding what the children face at home, Mason Crest teachers do not require homework, Kerr said.

For some students, home is a trailer park. At Audubon Estates near Alexandria, the 700 trailers house more than 1,500 children, many of whom attend nearby Hybla Valley Elementary, one of the poorest schools in the county.

Edelmira Moran, an Audubon resident and mother of a kindergartner at Hybla Valley, said she wished her child attended school with more affluent students who could inspire others to perform better.

“In other schools .?.?. they can see the other students and want to make a difference in themselves,” said Moran, 32, who came to the United States from Mexico 10 years ago. “In Hybla Valley, it’s 90 percent Hispanic. What the problem is, I think, is the style of life is all the same.”

Velkoff said it is a revenue issue. He said immigration reform could help families more easily attain legal status and begin adding to the tax base, noting that the rising percentage of students who qualify for subsidized meals and extra English instruction has put pressure on the schools budget.