The Catholic church has long encouraged Mexican immigrants and illegal aliens to keep their home culture rather than assimilate to American society. The cassocked fellows may believe that Mexican equals Catholic, and that's a good thing from their viewpoint.

Even though the church is given tax-exempt status (which requires it to keep its nose out of politics), it works purposefully to undermine the sovereignty of this country. It's ungrateful behavior, to say the least.

Sadly, many of the Protestant churches are mindless anti-borders flunkies also, but since most Hispanics are Catholic, that church in particular sees open borders and increased Hispanic pew-fillers as a plus for their side. As a result, the cassock brigades are the big dogs leading the amnesty pack.

The story of the Virgin of Guadalupe is something of a foundation myth to Mexicans, so the festival celebration is a big deal.

Catholic tradition teaches that a peasant, Juan Diego, was walking over a hill called Tepeyac, a site linked to an ancient fertility goddess, when a brown-skinned woman appeared. She spoke in Nahuatl, language of the Aztecs, and asked that a church be built on the hill, which is near Mexico City.

For the faithful, the image of the Virgin of Guadalupe is more than symbol, Estrada said. "It's real," he said. "It is like a person that gives you strength and courage."

Furthermore, the church's efforts are not just cultural but political. Our Lady Queen of Angels Church uses the occasion to promote its anti-American, pro-amnesty agenda.

The church has also been known for political activism. A sign outside the complex reads Madre sin fronteras — mother without borders — an allusion to immigration policy in the U.S.

The church uses each year's feast day theme to convey a message, its priests said.

This year, they chose "Do not be afraid, I am with you." They wanted to use the message to persuade illegal Latino immigrants to participate in the 2010 Census, Estrada said. "It's important that everyone is counted," the pastor said.

Estrada pointed to the plight of the poor and the undocumented in Los Angeles as reasons the story of the Virgin still resonates.

"Here in this church, it's not purely religious. We don't just say Mass and give confessions. We help organize people to treat themselves with dignity and express their culture."

This church's mission sounds suspiciously like Alinsky-style community organizing with a big dollop of Mexican self-esteem on top. It certainly bears little resemblance to spreading the gospel around Christmas, or at any other time. 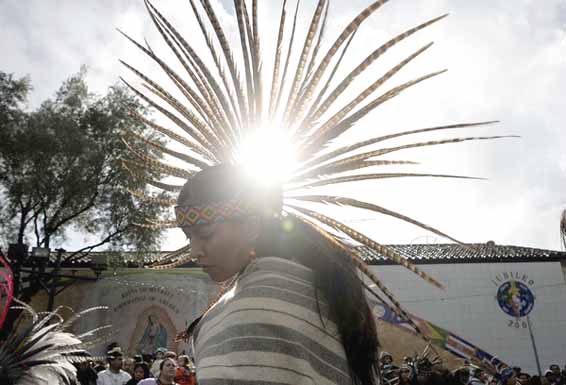 Dancers mark the Virgin's feast day at Our Lady Queen of Angels Church. "We celebrate as if it were in Mexico," said Father Paschal Amagba, an associate pastor of the church. "When the people come here, they feel at home."