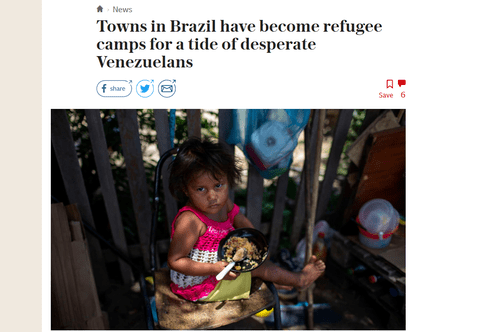 Johan Rodriguez, a builder by trade, is one of thousands of Venezuelans who have fled across the border to Brazil to escape the unravelling economy in their own country.

“The situation is hard for the kids,” said Mr Rodriguez. “We have to make it, so that they can eat, so that we can eat.”

He, his young daughter and his pregnant wife have been camping out on the side of the street in Boa Vista, Brazil, since they fled Venezuela a month ago.

Life in Venezuela has to be pretty awful these days if people are fleeing to Boa Vista.

Boa Vista was the destination of an expedition that writer Evelyn Waugh mounted in 1933 in which he crossed the savannah from British Guiana by foot, as recounted in his travel book Ninety-Two Days. During the weary journey of several weeks, he looked forward to the civilized luxuries of Boa Vista, from which he hoped to get river passage to the even more opulent Amazonian city of Manaus, with its famous opera house.

But, like Rick in Casablanca, he was misinformed. Of the history of Boa Vista, Waugh later wrote:

…It was a melancholy record. The most patriotic of Brazilians can find little to say in favour of the inhabitants of Amazonas; they are mostly descended from convicts, loosed there after their term of imprisonment…

They are naturally homicidal by inclination, and every man, however poor, carries arms; only the universal apathy keeps them from frequent bloodshed. There were no shootings while I was there; in fact there had not been one for several months, but I lived all the time in an atmosphere that was novel to me, where murder was always in the air…

There was rarely a conviction for murder. The two most sensational trials of late both resulted in acquittals…The [second] case was the more remarkable. Two respected citizens, a Dr Zany and a Mr Homero Cruz, were sitting on a verandah talking, when a political opponent rode up and shot Dr Zany. His plea of innocence, when brought to trial, was that the whole thing had been a mistake; he had meant to kill Mr Cruz. The judges accepted the defence and brought in a verdict of death from misadventure… (Penguin, 1983, pp. 90-91).

Waugh wound up having to walk back hundreds of miles to British Guiana.

Young writers of the time such as Waugh and Orwell were always looking around for projects that they could mine for travel articles, travel books and novels. Some of Waugh’s expeditions, most notably his two trips to Ethiopia, paid off literarily, while others did not.

Waugh was at his best in old traditional societies with complex gradations of status that were colliding with modernity, such as England and Ethiopia. His distaste for California’s cultural shallowness meant he could only stand to spend six weeks in Hollywood on MGM’s dime, which is why The Loved One is only minor Waugh.

Waugh’s most useless trip was to Spitzbergen, where there was no society or architecture, just scenery, which Waugh had no eye for.

The Amazon wasn’t much better for Waugh. The whole trip seemed like a bust, but Waugh got out of it the nightmare ending for his novel A Handful of Dust in which Tony Last has his life saved in the jungle by Mr. Todd, an enthusiastic (but illiterate) fan of Charles Dickens (whom Waugh loathed):