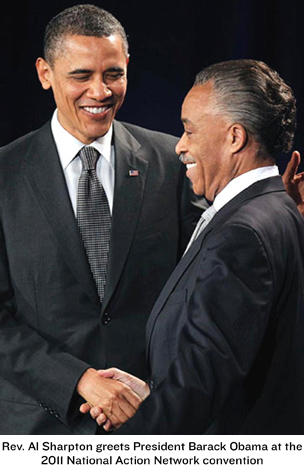 What would we have to laugh at in public life without Black Politicians?

Hard in the heels of the news that American Renaissance conference-wrecker Charlotte mayor Patrick Cannon had been indicted for corruption (John Derbyshire Charlotte Needs New Mayor: "Before Voting For A Black Politician...") comes the information that Al Sharpton has for years being betraying friends and associates for the benefit of the Feds: Al Sharpton's Secret Work As FBI Informant By William Bastone with Andrew Goldstone and Joseph Jessellili The Smoking Gun April 7 2014

When friends and family members gathered recently at the White House for a private celebration of Michelle Obama’s 50th birthday, one of the invited partygoers was a former paid FBI Mafia informant…

The ex-informant has been one of Obama’s most unwavering backers, a cheerleader who has nightly bludgeoned the president’s Republican opponents in televised broadsides. For his part, Obama has sought the man’s counsel, embraced him publicly, and saluted his “commitment to fight injustice and inequality”   The president has even commented favorably on his friend’s svelte figure, the physical manifestation of a rehabilitation effort that coincided with Obama’s ascension to the White House

… he has the ear of the President of the United States, an equally remarkable and perplexing achievement for the former FBI asset known as “CI-7,” the Rev. Al Sharpton

If Sharpton’s account is to be believed, he was simply a concerned citizen who voluntarily (and briefly) joined arm-in-arm with federal agents, perhaps risking peril in the process. The other explanation for Sharpton’s cooperation—one that has uniformly been offered by knowledgeable law enforcement agents—presents the reverend in a less noble light. Worried that he could face criminal charges, Sharpton opted for the path of self-preservation and did what the FBI asked. Which is usually how someone is compelled to repeatedly record a gangster discussing murder, extortion, and loan sharking.

We at VDARE.com have a soft spot for Sharpton whose spearheading of the repression effort when Peter Brimelow spoke at CPAC in 2012 James Fulford covered in Brimelow At CPAC: Al SHARPTON Is Complaining About "Hate"?

So, which Black public figure is next?