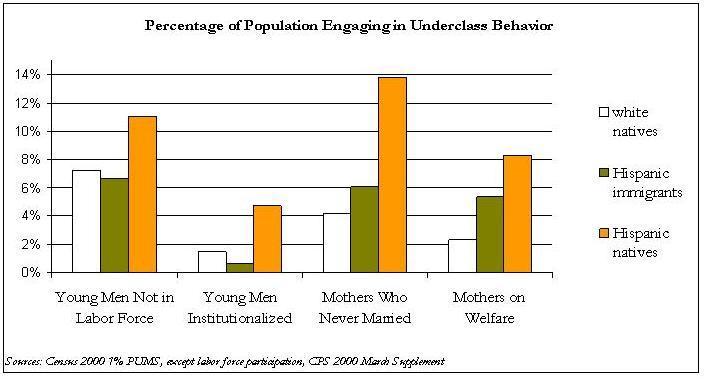 Jason Richwine of the American Enterprise Institute had a post up recently with the above awkwardly large graph, the key of which can be seen by doubleclicking on the graph. The white bar is American-born whites, the green bar Hispanic immigrants, and the orange bar American-born Hispanics.

Richwine was responding to a Center for Immigration Studies report arguing that Census reports showing much lower crime rates for immigrant Hispanics than American-born Hispanics are misleading. The graph above shows 2000 Census data, with % of young men institutionalized (largely, imprisoned) being very low for Hispanic immigrants, below the American-born white average, and considerably higher for American-born Hispanics.

Steve Camarota and Jessica Vaughan of CIS point out dubious aspects of the data — e.g., illegal immigrants have an incentive to lie in order to avoid deportation.

Richwine counters: " ... increased crime in the second generation is consistent with an increase in several other underclass behaviors. As the chart above indicates, labor force dropout, illegitimacy, and welfare usage are all much higher among Hispanic natives than among Hispanic immigrants. (Those data come from reliable interviews of normal people outside of prison.) It makes sense that crime would increase if all of those other underclass problems are increasing as well."

I suspect that the 1996 legislation to restrict immigrants from getting welfare has had a good effect, in contrast to immigrants to Europe. Also, the horrific rise in gang crime in Mexico has provided a more exciting alternative for criminally inclined Mexicans than immigrating to the U.S. Why go through all the hassle of going to the U.S. and becoming a roofer when you can be a Big Man with a Gun for a salary on the Mexican side of the border. So, we may have been getting in recent years the better sort of poor young Mexican.

I would also point to the macro evidence that first generation immigrants have low crime rates. If you look at murder and nonnegligent manslaughter rates by sizable cities, the rankings are dominated by cities with large black populations: New Orleans, St. Louis, Baltimore, Detroit, Washington, Oakland, Kansas City and so forth.

The bottom of the FBI's list of cities is Lincoln, Nebraska, which is something like 88% white. Then comes Honolulu. Then come some highly white, slightly Hispanic Southwestern exurbs like Henderson, NV, Chandler, AZ, and Plano, TX.

Then comes El Paso, which is now 80% Hispanic. El Paso has been famous for its pacific citizens for several decades. Even an all Hispanic entrepot destination like Santa Ana, CA has a murder rate of 8.8, less than twice Portland, Oregon's.

On the other hand, within a heavily Hispanic area, the great majority of murders involve Hispanics. For example, here is the LA Times' Homicide Report. By this point in LA's social evolution, Philip Marlowe would have nothing to do. The white criminal element has largely been priced out of the Los Angeles area.

For example, there is a single legendary Los Angeles Unified School District public middle school in the extreme northeastern corner of the San Fernando Valley, up against the edge of the mountains, that is notorious for having white underclass students from biker / addict backgrounds: parents show up drunk for teacher-parent conferences and try to punch out teachers, fathers have Aryan Nation prison gang tattoos, moms' teeth are falling out from crystal meth.

Similarly, the LA cop novelist Joseph Wambaugh has just finished up his Hollywood Station trilogy (Hollywood Moon is another good read). He likes to have a white criminal or two in each one, but realistic ones. He puts in a lot of effort to explain how they can afford to live in Hollywood (e.g., meth head inherited his house in Hollywood from his mom) and what kind of crimes they specialize in typically, identity theft, burglary, or dressing up in superhero costumes and harassing tourists on Hollywood Blvd. for tips. Few of Wambaugh's contemporary white criminals have anything in the way of a gang for support. They're just isolated nasty lumpenproles left over.

The LAPD's colorful Most Wanted website tends to be dominated by immigrants, but a large reason for that is that wanted immigrants are more likely to skedaddle back home where the LAPD can't get them, in contrast to the homeboys who have nowhere to go. So, over time, the Most Wanted list fills up with Mexicans, Russians, Armenians, Salvadorans, and the like, who are overseas, but still on the LAPD's books.

So, the overall crime rate in LA is fairly low right now — the 2007 homicide rate was the lowest in four decades — but the white crime rate (outside of various Middle Eastern and ex-Soviet gangsters, and, lately, a few subprime-related incidents, which are colorful but not common) is incredibly low.

That of course raises questions about the sons of the immigrants. Will they continue the historic pattern of higher crime rates than their fathers?

P.S. A reader points to this June 10, 2006 article in the LA Times breaking out homicide rates by race/ethnicity:

The numbers reveal a wide racial divide regarding violent crime.

It's also interesting that you can calculate the Who's Winning ratio by dividing suspects by victims. Hispanics make up 50% of the victims but 66% of the suspects, so they are giving better than they get. Blacks, in contrast, make up 29% of the suspects and 38% of the victims, so that suggests that more Hispanics are killing blacks than vice-versa. There have been a few highly publicized incidents that would suggest this, but I've never seen any figures before.

That Who's Winning ratio is rather unexpected since the Hispanic homicide rate is nationally less than half the black rate, and in LA is half the black rate. But it does jibe with reports that Hispanic gangs in the Southland have gained the upper hand over the notorious black gangs (e.g., the Bloods and the Crips) that became so celebrated during the gangsta rap days.

The white murder rate is so low that domestic homicides among LA whites must now be rare. My guess is, based on anecdotal evidence, that the higher homicide rates among LA's Others (who are primarily Asian) than among whites stems in part from more domestic homicides.

Of course, we are dealing with small sample sizes here.

Anyway, all this helps explain some of the paradoxes involved with crime rates right now. White homicide rates in big cities, it appears, have now dropped to extraordinarily low levels.