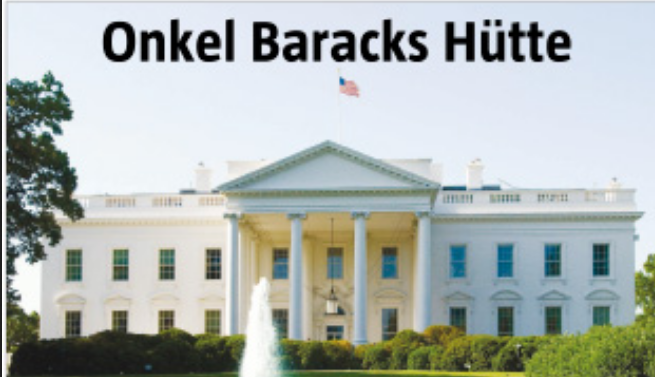 The Nineteenth Century novel and play Uncle Tom's Cabin is better known in Germany than you might think—there's a subway station in Berlin called Onkel Toms Hütte, and when the novel came out it was as popular in Germany as it was in the rest of the world.

That's why when the leftish Die Tagezeitung published a cover picturing the  White House, with the words "Onkel Baracks Hutte," they were making a cultural reference they didn't have to explain.

However, the London Times's blog is referring to this as the "The Barack Obama cover scandal" and linking to a Der Spiegel story that's titled"German Newspaper Slammed for Racist Cover." Der Spiegel managed to find an American white liberal to take offense:

Gary Smith, [Send him mail] executive director of the American Academy in Berlin, a private center which promotes trans-Atlantic relations, told SPIEGEL ONLINE Thursday that the cover left him "speechless." "'Uncle Tom' is a racial slur, and the Taz editors clearly sacrificed substance and principle for an unreflected laugh," he said. "A journalism that prides itself on treating stereotypes with irreverence needs to think harder about its own deployment of stereotypes and racial allusions. There are countless ways to address the issue of race in this year's election more intelligently.

The American Academy in Berlin sponsored a talk on Free Speech and American Media by a fellow who misses the Fairness Doctrine.

But the whole thing  shows once again that there is nothing you can say about Obama that won't be a gaffe.

Article
JOHN DERBYSHIRE Returns To Quiet Despair After Satan Strikes Back In Waukesha Charlottesville, Brunswick GA. But Not Surrender