Diversity ideology falsely posits that all cultures are morally equal. Its continued credibility depends upon a constant stream of cheerful puff pieces from the media in favor of multiculturalism, while ignoring the shadow side of human nature.

Occasionally, elite media (the BBC in this case) investigate rough societies in the third world, and always seem surprised at the horrors they find.

A BBC investigation into human sacrifice in Uganda has heard first-hand accounts which suggest ritual killings of children may be more common than authorities have acknowledged.

One witch-doctor led us to his secret shrine and said he had clients who regularly captured children and brought their blood and body parts to be consumed by spirits.

Meanwhile, a former witch-doctor who now campaigns to end child sacrifice confessed for the first time to having murdered about 70 people, including his own son.

The Ugandan government told us that human sacrifice is on the increase, and according to the head of the country's Anti-Human Sacrifice Taskforce the crime is directly linked to rising levels of development and prosperity, and an increasing belief that witchcraft can help people get rich quickly.

The extreme depravity of the witchcraft practiced in Uganda is stunning.

Former witch-doctor turned anti-sacrifice campaigner Polino Angela says he has persuaded 2,400 other witch-doctors to give up the trade since he himself repented in 1990.

Mr Angela told us he had first been initiated as a witch-doctor at a ceremony in neighbouring Kenya, where a boy of about 13 was sacrificed.

"The child was cut with a knife on the neck and the entire length from the neck down was ripped open, and then the open part was put on me," he said.

Below, the genitals of three-year-old Mukisa were hacked off to be used in witchcraft. His parents are concerned about what kind of life he will have. 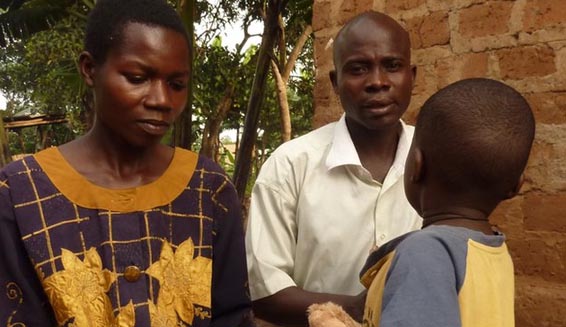 The BBC also includes a slideshow: In pictures: Child sacrifice in Uganda.

Finally, Uganda is regularly included in the Diversity Visa Lottery, since the State Department believes that America is enriched by the presence of Ugandan immigrants (e.g. 433 in 2009 and 396 in 2010).